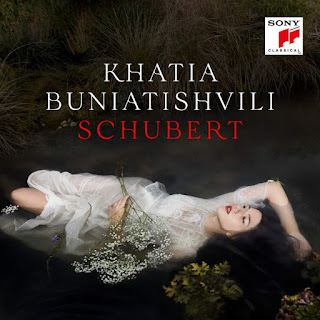 There is of course more than one way to play a composer, a piece of music. And of course there can be in different epochs different trends in performance practice. So when it comes to Franz Schubert and his wonderful piano music there may be a movement away from a sort of Rachmaninoff-ian bluster, the emotive slam-bang of perhaps an exageratedly passionate gushing forte to a more reflective, poetic emphasis on the spellbinding pianissimos and then so a more heightened contrast between loud and soft. I was attracted to the late Jorge Demus' Schubert performances early-on for this quality. And now I think I may have found the ultimate Schubertian to my way of thinking. That is in the person of Khatia Buniatishvili, a most lovely voice on the piano, as I hear gladly on her new album simply entitled Schubert (Sony Classics B07NKZ33JB).

I took a cursory glance on the internet to find that Khatia is already well along in her rise to acclamation. And if there is any doubt as to her poetic soul and rare insight into Schubert listen to these lines from her comments in the liners. "There is a certain femininity and sensitivity in Schubert's works, as well as an ability to wait and endure. This femininity and heightened sensitivity are destined to die. Yet this suicide is to be found at such a profound depth, stifled, with no outward expression of the tragedy of loss..." It would seem she has lived inside this music to a point of great understanding?

All you have to do is listen to this album. Then you will very much hear it. You will know. She chose wisely, things that she seems to love greatly. We are treated to her performances of the "Piano Sonata in B-flat major D 960," the "4 Impromptus D 899" and the Liszt piano transcription of "Standchen 'Leise flehen meine Lieder.'"

The cascades of notes in the Impromptus, the soulful mystery of the quiet passages in the Sonata and the contrasting majesty of the forte passages, and the sheer beauty of the Leider, all alert us to a greatly superior artist, a true master of the Schubertian gesture, of the short but intense life in music, the voice that speaks so eloquently through Khatia Buniatishvili, a Maria Callas of the piano, someone who feels it all and can portray it for us so singularly as to be unforgettable in her impact, or at least so to me. There is a liquidity to her phrasing, a very subtle gradation of levels of touch that is marvelous to hear. Slow-fast soft-loud here-silent contrasts play ever so readily in the act of performance that we nearly hear him anew,  nearly.

This is an album I hope many will treasure in years to come. On the basis of it I am a convert to her magical spell, her sound and sensibility, her rare feel, at once sensual and deeply channeled through human volition. The syntax of her phrasing flows so fluidly, so naturally that she is the epitome of the "native Schubertian," a native of the music world that includes Schubert of course, I mean. A native of humanity, as must we be, all of us who are musically human, as much human as musical. There are passages that seem uncannily as if she is recollecting the music from deep inside memory. Other passages seem like a direct experience, a presence that is palpable and propelling us in real-time, if that makes any sense. It is hard to put into words but there are time frames of expression one might discern here happily, or at least that is a way to say it. It all comes out in terms of touch and a very subtle rubato that flows as we flow through life, perhaps.

This is an album for anyone who loves Schubert, who loves the piano played exceptionally well. It is one for the ages, as it would appear is Ms. Buniatishvili. I am glad for it. Hear this one. You might just be glad to be here to hear it. I am.
Posted by Grego Applegate Edwards at 7:45 AM