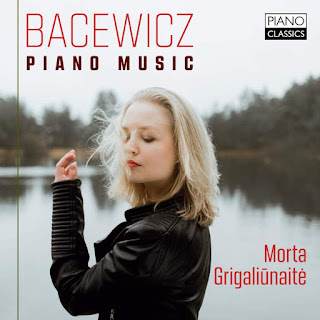 Those of us especially outside of the local clime (Poland) of composer Grazyna Bacewicz (1909-1969) may have missed her music when she lived (I was at any rate too young) but since her passing we gradually have come to know it and appreciate it, thanks to the international interest her music has produced in the later years of the 20th Century and the first decades of the new Millennium.

I for one have missed her output for the pianoforte until now. This welcome Piano Music (Piano Classics 10183) volume as played with conviction and drama by Morta Grigaliunaite fills the gap with something seemingly definitive.

Like the many varied Bacewicz compositions we can hear nowadays for the full gamut of configurations she wrote for, we find in the program at hand always a concentric universe of applied musical invention of a high caliber.

The seven single or multiple movement works on this program remind us how sincere, how authentic her music sounds to us today, or at least that is what hits me listening now. The concluding work on the program, her "Piano Sonata No. 2"  in lots of ways sums up her musical and especially her pianistic identity. The musicality of it all puts us in mind of the lineage of Modernism to which she belongs, so we do hear the genetic relation of Bacewicz with Stravinsky the Neo-Classical and Expression-Modernist, and then too the related ways of Prokofiev, Bartok, Kodaly Janacek... in many ways the local, folk focal is never entirely removed from the expressions at hand, but so is the Modern piano tradition as it grew out of later Romantic poets of the ivories, Schubert to Chopin. There is a backbone of pianistic tradition that holds it all grandly upright (so to speak), and then of course it thrives still in this music because of the original ways of Ms. Bacewicz.

The interplay of piano tradition and Modern expression is truly in the end quite present and poignant in this music. This is first-rate Bacewicz and that in turn makes for some of the most important music by women, or I dare say for that matters any composers of the last century.

Dig in and listen to "Little Triptych," "Concert Krakowiak," the "Children's Suite," "Two Etudes for Double Notes," "Ten Concert Etudes," "Trois pieces caracteristiques" and the "Piano Sonata No. 2." Every work is worth hearing and original in subtle ways. You get fiery and sensitive performances of music we all should take to heart.

Bravo!
Posted by Grego Applegate Edwards at 7:37 AM