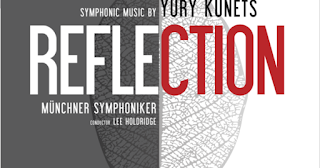 What music that gets rendered into sound in our world today is not exactly what was likely to come out in, say, 1970. The Contemporary Classical World is multi-fold to an extent perhaps never so various as today. So the very tonal and almost New Age mellowness of the compositions of Yury Kunets, in a new album entitled Reflection (Solo Musica 292) might not have seen the light of day then, provided that the music existed, and that is not the issue, just that there is a Rear Mainstream now that we might come across more readily now than then.

There are eight compositions on this program, many include a semi-concerted piano part played by the composer.

This is music most certainly fashioned to please and comfort. The music in the composer's words portrays "reflection" "of the spiritual being and a true picture of what is in it." The liners go on to say that the music deals with images that "draw on a series of inspirations, from the beauty and magic of moonlight and the winder scenes of Yury's homeland to nostalgia, spirituality and true introspection." That could be words one might have found in the liners of a Mood Music album from the '50s. And in many ways this might be thought of as a descendant of those hifi days where one sought a consistent backdrop for a way of psychologically becoming. The emphasis is on effect or affect more than invention, and that fits with the objectives I would say.

And in that way too the music has some elements that are stirring in a sort of ever simplissimo, ever easy whistling,  tunefully Neo-Romantic way that goes deeply into effect more than means, though the music is well scored and hangs together with no defects. The themes are not as distinguished as they are relentlessly authentic to the reflective realm they wish to inspire and produce.

So in this instance one is dipped into a rich batter of mood that remains as dazzlingly mellow the first time as the 100th. The immediacy of simplicity and uncomplication is at the forefront. It does not get better, nor does it get worse with repeated listens. It is pleasure and that no doubt will appeal to a potentially large swath of listeners who want to remain calm through music.

I do not discourage those who seek such a thing. This music is as good an example of it as I have heard in the last few years. It is perhaps something to fill the spaces in between your occurring life. It can be safely ignored or you can listen. I love the effect. I love much less the means to the end. So what? That is not your problem. You want something to don when you feel the need, get this. You might feel you are part of a movie and this is its unobtrusive soundtrack. So be it. He's no Beethoven, as someone once remarked at the end of a concert. So it ain't what it isn't!
Posted by Grego Applegate Edwards at 3:12 PM