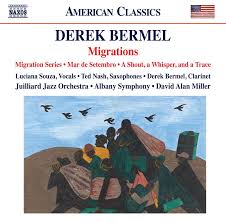 While the name of US composer Derek Bermel (b. 1967) may be new to me, the music on his album Migrations (Naxos 8.559871) has a New Music-Modern Jazz tang that rings true in a local sort of way, that he takes on certain style clusters known in USA musical channels and makes them his own in ways that please and intrigue. There is familiarity, then, but newness in equal turns.

The title work "Migrations" is quite au courant as it deals with the movement of populations, as would-be refugees, as emigrants, a situation we have experienced only too directly in the refugee crisis in Syria in the past decade and then especially in the Trump Presidency in the US the situation of refugees seeking political asylum, most notably emigrants from Central America. The "Migrations" work themes itself around such large-scale people movements.

Notably on the cover of the CD (pictured above) is a painting by Jacob Lawrence (1917-2000) entitled The Migration Series, Panel No. 3: from every southern town migrants left by the hundreds to travel north (1940-41). This in part forms the pictoral foundation for the music, the later of which was commissioned by Wynton Marsalis for the Jazz at Lincoln Center Concert Series. The cycle of some 60 paintings by Lawrence comes to grips with the movement of Afro-Americans from the Rural South to the Industrial North and so too does Bermel's five movement work. And so thematic parallels have local historical bases that we can think of with the overlapping of repetitions and non-repetitions in various ways. Now is of course not then, but there are ominous intertwinings we can sense when we follow present events.

The work itself features the well situated Julliard Jazz Orchestra (along with the Albany Symphony, all conducted by David Allen Miller) with soloists Ted Nash on soprano and alto sax, and Bermel himself on clarinet. The music is a kind of ambitious Modern Big Band Jazz that hearkens to the innovative stances of George Russell, Gil Evans and perhaps Claire Fischer, and takes the art further into personal territory. It is a work that increasingly strikes you as having some profundity the more one listens. Masterful and invigorating! Cutting edge!

From there we go to two works that involve more New Music an orientation, with the Albany Symphony and soprano Luciana Souza in the songful Portugal-oriented "Mar de Setembro" based on a poem by Eugenio de Andrade. It is exceedingly beautiful music, harmonic-melodic in ways that seem as Brazilian as Modern, more lyrical than strident.

"A Shout, A Whisper and a Trace" brings us to a fully Modern orchestral zone of vibrant sound color, with an infectiously and rhythmically dancing, folksy, almost Coplandesque-meets-Stravinsky opening that quickly turns bi-total. It is all most delightful in its very own way.

Because my personal life has at times lately become trying I have within the ongoing chaos ended up listening to this album much more than I might have ordinarily as a first go of things. After maybe ten listens I must say I thoroughly appreciate this one in ways that a long exposure helps create. It is important, beautiful, expressive music, all of it. And it is very well performed. Grab it!


Posted by Grego Applegate Edwards at 2:49 AM