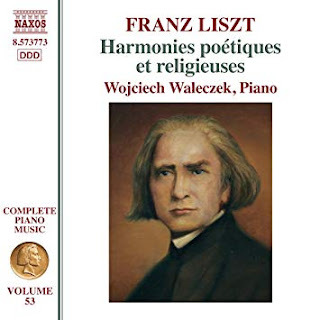 Volume 53 of Franz Liszt's Complete Piano Music is no afterthought, but rather presents his Harmonies poetiques et religieuses, an ambitious work of his early maturity, written in 1847 when he was (according to my math) 36 years old. He had settled in Paris, then was concertizing, was attempting to do for the piano what Paganini was doing for the violin, or in other words establishing a kind of diabolically religious virtuosity that would make of him a cult figure of sorts and permanently establish the piano as an almost supernatural force in music.

This set of some 12 individual pieces is not quite of the bold otherworldly dash of the Transcendental Etudes, but then of course very few works are, be they by Liszt or anyone else.

Nonetheless this set of pieces has a bit more of an Apollonianly sturdy heroic gravitas to it that sets it apart. Pianist Wojciech Waleczek gives us a reading that is not overly flamboyant and instead underscores the Apollo piano aura the work gives to us in global terms.

It is a set that helps define what later virtuoso Promethean pianism was to be--thanks in no small part to Liszt, To say that is to say that the music is well worth your earful. It is Naxos priced so what's to lose? Check it out.
Posted by Grego Applegate Edwards at 9:21 AM