Ensemble Made in Canada, Mosaique 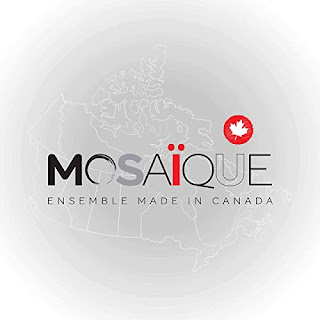 As I write this the Pandemic has wrought huge changes around me and around the world. Many steps have been taken to try and slow down the outbreak. I keep up with the social distancing in my apartment and happily there still is plenty of New Music to write about, so I remain productive.

Today we consider Mosaique (Factor Canada 0 51497 14047 2) by Ensemble Made in Canada. It is a 14-work celebration of the vast diversity and beauty of the country-wide span of territory, with a piece for nearly every geographic-cultural niche. It was specially commissioned, premiered during the summer of 2018 and now takes the form of this recording so that we all might hear, rehear and generally appreciate the whole of it.

Ensemble Made in Canada is a most cohesive gathering of talent--a quartet featuring Angela Park on piano, Elissa Lee on violin, Sharon Wei on viola and Rachel Mercer on cello.

Andrew Downing's opening "Red River Fantasy" (for Manitoba) and Julie Doiron's "Blessed" (for New Brunswick) (arr. by Andrew Creegan) are the most striking thematically of  these many works, but then there is much else that is quite heartening. This is partly lyrical POMO fare, with some sounding more overtly Modern than others but all played very well and very worth hearing.

Rather than try and run down the salient points of all fourteen works instead I list the composers and regions that I have not mentioned yet: Richard Mascall (Ontario), Nicolas Gilbert (Quebec), William Rowson (Nova Scotia), Vivian Fung (Alberta), Barbara Croall (St. Lawrence Seaway and Great Lakes), Samy Moussa (Nunavut), Kevin Lau (Yukon), Ana Sokolovic (British Columbia), David Braid (Northwest Territories), Nicole Lizee (Saskatchewan), Darren Sigesmund (Prince Edward Island) and Sarah Slean (Newfoundland). Needless to say, you might not be familiar with many of these composers and that is the point in some ways. Here indeed is very New Music specially produced in the last several years to give you a broad survey of the Canadian scene and so all the better for it.

Ensemble Made in Canada are a finely attuned, very talented chamber group who via this project have created a vivid moment on the Canadian New Music scene that gives us an important cross-section of new Canadian composers and the sheer wonder of Canadian locales as a complex matrix, a vast resource. Bravo. You should hear this.