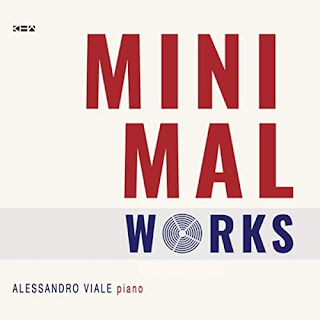 From Italy we have pianist Alessandro Viale and his well-considered program of Minimal Works (KHA 018). As I have been listening it strikes me that Viale in his choice of some 16 short pieces does a fine job in summing up a disparate set of a.) some "doctrinaire" Minimal classics (by Glass, etc.) in the lyrical-melodic rather than mesmerizing mode, but also b.) brings in interesting related pieces by composers we might not ordinarily put into the Minimalist camp.

And at this perhaps somewhat late date for the timeline of such things, Viale's summing gives us the insight that thoughtful retrospectives allow. And like the best of this kind of hindsight review, there are expected classics and unexpected surprises.

In addition to the nine solo piano works, there are four pieces for violin and piano that bring in violinist Rebecca Raimondi, and then three piano duets adding Assunta Cavallari. The performances are uniformly warm without being sentimental, uniformly expressive and painstaking. With the variety of groupings and memorable works time passes quickly and nicely for the listener.

Not surprisingly John Cage's 3rd of his "Six Memories" for violin and piano reminds us that there exists a post-Satie, pared-down strain of his music that has a straightforward elemental Minimalist quality to it. Perhaps less expected is a minute-long Peter Maxwell Davies "Snow Cloud, Over Lochan" that has a similarly elemental haiku brevity and succinctness. Ligeti's "Musica ricercata: No. 7"  has a bracing, driving left-hand motif and a beautiful half-time right-hand melody that puts him too in his own, special Minimal place.

Nils Frahm's "Familiar" has an almost early Keith Jarrett-like whimsical lyricism. Lera Auerbach's "Prelude No. 15" for violin and piano has a mysterious liquidity rewarding to experience. The Matteo Sommacal duet "Forgotten Strains" is rather nocturnal, haunting. David Lang's violin-piano "Light Moving" has all his charm in microcosm. And the concluding, well known Arvo Part "Spiegel im Spiegel" has an appealing earthy treatment that ends up putting a smile to your face (if you are like me, anyway). There is more I could say about the other works included in this program but this should give you some idea what you'll find.

The fine performances and wide-ranging choices make this set far from ordinary or predictable. One is in the last instance filled with lyrical poetics and reminded that Minimalism looking back has covered a good deal of ground and given us a refreshing sea change that as we know has given the very later Modern voices something to react to, both against and toward. This collection I highly recommend. Viale gets it all very right.

Posted by Grego Applegate Edwards at 7:39 AM