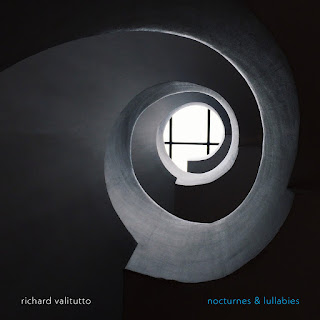 The tree falling in the woods idea holds true on the musical front, just as it always has. For New Music to exist in some validated or institutional sense there must be an audience of course. I hope I play some role in such things, originally as a consumer and physical presence on the scene, now as a writer, ever I hope also as a music-maker.

Today's selection exemplifies a good sort of "new" as a real contribution towards a special kind of solo piano music. Richard Valitutto is the pianist. The album goes by its title Nocturnes & Lullabies (New Focus Recordings FCR243). The label explains that this music concerns "themes of transitional states between light, dark, consciousness, and unconsciousness" or alternately-additionally night, sleep, and life/death  Further the eight solo works contained in the program (seven or which are premiere recordings) engage the pianist in his striving for a kind of "anti-virtuosity," or more specifically directs him away from the sort of note-weaving typical of conventional piano playing-writing and concerned more with experimental goals, of widening the palette of sound colors and techniques obtained in the act of piano performance.

This program nicely opens and expands the sort of poetic piano Modernism of sound color one might trace from Ives, Cowell, Cage and his colleagues to George Crumb and his reflective pianism. All eight of the works on this album espouse a poetry of sound that invites a kind of expansive introspection. Tone clusters, mesmeric and sometimes ritualistic repetitions, thunderously or flashingly rapid single-note rollings, percussive dampened extreme upper register repeats,  cavernous resonance and open sustains, inside-the-piano hand techniques, the enhanced use of aural space, the full syntactical recourse to all the available notes in all registers, an edgy Modern harmonic expansiveness that generally neither dogmatically favors consonance nor dissonance as a whole, those are some of the traits of the music at hand, all in the service of a thematic night of time and experience, of a nocturnal mood as we might look back upon it from John Field and especially Chopin onwards, only set free from typical cantabile stylings per se.

The full span of our Late Modern period comes into play in these works, from 1984 through 2015. Five of the eight works however are from the last decade.

The composers names may not be entirely familiar to you, yet the music shows us that each has a vision for the piano that intertwines as Richard Salitutto in effect curates wisely and judiciously, then performs each chosen work with a definite dedication and a dramatic musical proportionality. And so we are made aware of piano adventurousness from the likes of Nicholas Deyoe (two works included), Rebecca Saunders, Philip Cashian, Marc Sabat, Maura Capuzzo, Wolfgang von Schweinitz, and Linda Catlin Smith.

Heartily recommended for those wishing to remain fully versed in the most modern in solo piano music and for adventuresome souls in general. Well done!
Posted by Grego Applegate Edwards at 9:34 AM