Sandbox Percussion, And That One Too 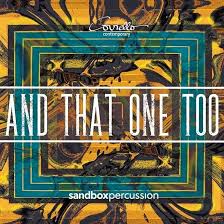 A quartet known as Sandbox Percussion makes its debut this season with their album And That One Too (Coviello Contemporary COV91918). It consists of Jonny Allen, Victor Caccese, Ian David Rosenbaum and Terry Sweeney. Since their formation in 2011 their goal has been to establish long-term collaborative relationships with composers in order to further the possibilities of what can be done with percussion from both a technical and an expressive perspective.

The four works represented on the album sum up, according to Rosenbaum, this past nine years and the best and most transformative collaborations. Each work occupies its own world, its own space.

So there are highly melodic interlockings via pitched metallic objects on Andy Akiho's "Haiku 2." The music recalls the complex layering of Gamelan music and a bit of Steve Reich's contrapuntal additive matrices taken a step further.

David Crowell continues the momentum with his "Music for Percussion Quartet" (which adds Crowell on guitar). In the opening music for mallet instruments and drum set there is a very beautiful sequencing of irregular phrase lengths, then bowed vibraphones form enveloping, slowly unfolding passages, followed by a layered series of cascading mallet motives that take over for interesting movements in aural space. More bowed mallets give us a reflective conclusion. This work has definite atmospherics that stay in the listening mind nicely.

Amy Beth Kirsten follows with multi-part, uniquely captivating, ritualistically unfolding vocals and the quartet giving it all a beat and a percussive color veneer for her "she is a myth." The concluding part waxes lyrical and then ends while one might want some more! Well done.

The finale work is the longest of the segments with a three movement, nearly 30-minute Thomas Kotcheff work entitled "not only that one but that one & that too." Part I begins with some meandering yet insistent woodblocks (I believe) in an ensemble, then includes lower-pitched wooden mallets that create heightened, unfolding rhythmic interest and thematics. The momentum grows as the percussive instrumentation drills down to a kind of contrapuntal froth.

The second movement has subtly insistent, irregular unpitched soundings, then a single pitched bongo and tom-tom drum patterns, all played with a musicality that puts everything into place. The complexity grows and gathers a good deal of steam as the number of struck drums increases. The rhythmic interplay intensifies as the pulse becomes more underlined in complex ways.

The last movement involves a switch to small bell-like metallic instruments that work together in a confluence both delicate and introspective, then increasingly motile and driving in quiet ways.

The very end is a slightly mysterious yet musically satisfying suspension of both the work and the program at large, leaving one ready for more yet glad for the thoughtful whole.

The Sandbox Percussion debut fulfills its mission well. By the end one feels that one has re-created in a well evolved series of extended possibilities for percussion quartet. It is lively and absorbing fare and a most promising first album. Definitely recommended.
Posted by Grego Applegate Edwards at 8:55 AM