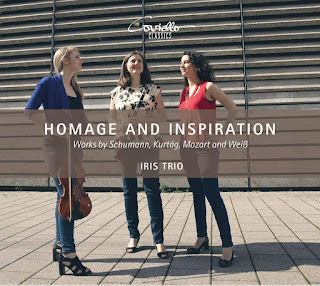 Inspiration from the classics, homage to their continued vitality for us. That is the central theme behind music from the considerably talented Iris Trio on their debut album, Homage and Inspiration (Coviello Classics COV92002). The program grew organically out of the trio's first appearances beginning in the Spring of 2013 when Christine Carter (clarinet), Molly Carr (viola) and Anna Petrova (piano) played their first concert as the Iris Trio at the German Consulate in New York. The program consisted of Robert Schumann's Marchenerzahlungen Op. 132 (Fairy Tales) and Gyorgy Kurtag's Hommage a R. Sch. Op. 15d, which paid tribute to Schumann with a Modern work utilizing the same instrumentation.

Add to that the additional aspect of it all--that Schumann in fact wrote the Marchenerzahlungen as a homage to Mozart and his Kegelstatt trio--and so we in fact here have a most extraordinary sequence of homages and inspirations.

The brilliant thematics of the program pull together the "classic" and the Modern with a continuity-commonality which nevertheless draws stylistic boundaries in that the "Modern" sounds more like the present than not--so that the homages and inspirations are real but not obviously quasi-quotational, instead subtle. That of course is how it should be. The compositional hand writes after having already moved on, so to speak.

The Weiss both temporally and stylistically place the most complex and virtuoso demands on the trio and they certainly and definitively rise to the occasion. Yet all four works in the end are performed with an articulate zeal that is as joyful in its expression as it is exacting in its execution. These are extraordinarily, mutually attuned practitioners that deserve our acclaim.  They take on the classic and the present-day with equal poise and authentic fluency. Bravo all concerned. A delightful offering in every way.
Posted by Grego Applegate Edwards at 8:45 AM