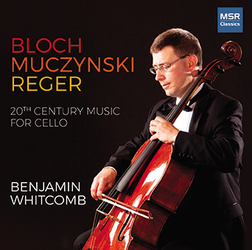 Anyone who knows Bach's unaccompanied cello music knows how intricate and unforgettable it all is--especially after one has heard it a few times. For the serious listener it is an excellent embarkation point for further explorations into the cello repertoire. Assuming that, today we have an alternate journey through the unaccompanied zone with 20th Century Music for Cello (MSR Classics MS1587) as performed quite ably and perhaps even selflessly by Benjamin Whitcomb. It is a good selection of some three less-well-known works and even perhaps one simply not at all well-known solo cello work from last century.

It consists of the "Gallery--Cello Suite" (1966) by Robert Muczynski (1929-2010), the "Cello Suite No. 2" (1915) by Max Reger (1873-1916) and lastly another "Cello Suite No. 2" (1957), this one by Ernest Bloch (1880-1959). You may not know some or perhaps even any of these works. Yet in this Whitcomb recital they stand out as things that supplement how you look at the unaccompanied cello possibilities, all owing something indirectly from Bach and also the 20th Century and its expanded sense of melodic-harmonic development. The works are post-Romantic without being avant exactly. They all share with Bach's unaccompanied cello works the Suite format--a grouping of interrelated brevities that manage to cohere as one gesture.

Whitcomb gives us a reading of these works which are marked for their rather unassuming straightforward approach. They are neither heart-on-the-sleeve molto-expressivo nor are they spun out with some carpet-making regularity. That is to say that they are attentive to the widest arcs of the musical syntax as well as the fine-meshed details. Whitcomb does not turn these into extroverted virtuoso vehicles so much as he produces a well balanced set of readings that allow the listener to gauge the works properly, assuming an unfamiliarity and/or an appetite for the compositional wholes--as wholes.

For me the Muczynski is the happy surprise, in that I did not know the work. Nonetheless all three pieces get a bold no-nonsense definition here. They are good to hear--probably regardless of the specifics of your general orientation to the contemporary. So take a listen if you will.
Posted by Grego Applegate Edwards at 9:57 AM