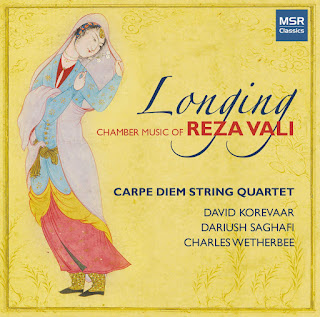 The traditional Persian musical heritage of composer Reza Vali forms a vital core for much of a recent volume devoted to his chamber music, Longing (MSR Classics 1738). It features the very sympathetic readings of the Carpe Diem Quartet, violinist Charles Wetherbee, pianist David Korevaar and for one piece, santoorist Dariush Saghafi. The program consists of five single or multiple movement works, all written within the past decade, all freshened essays in musical sound.

It is a perhaps obvious truth that on the one hand we have the Romantic tradition in the age of classical music that begins sometime in the 19th century and ends sometime in the 20th. But it is equally so that some other ages and other local traditional folk or folk-classical traditions may center on feelings in a Romantic way as well. That is certainly true of the Iranian-Persian Classical tradition as it has come down to us. It is the case in this Reza Vali program that a Persian world of feeling-expression presents itself in rewarding ways.

There is also a nod to Western Romanticism in the opening "Three Romantic Songs for Violin and Piano" (2011). It is a tribute to Brahms according to the liners and to me not the most attractive item in the program, but it does retain its freshness on repeated hearings so I'll leave it at that. It adds another dimension to the composer's output, so good for it. It is at any rate worth hearing.

The other four works deal more directly with transforming the composer's appreciation of Persian classical and folk roots into a Western Classical-Modern world, somewhat akin to what Hovhaness did so well with his own Armenian roots.

There are some remarkable works to be heard, with the tuning of the strings often enough in the specially untempered mideastern way and a pronounced Folk-Modern outlook. Start anywhere, but perhaps a good place is with the violin-piano "Love Drunk (Folk Songs, Set No. 16B)" and its special way. I recognize one of the songs as in a recorded version on an old Folkways album I have had for a long time. Start there to hear how Vali espouses a music not unmodern, not deliberately archaic so much as engaged in transforming influences from a very old tradition into something Modern Classical in an original way.

So you will hear in addition "Ashoob (Calligraphy No. 14)" in versions for santoor (a kind of hammered dulcimer important to Iranian tradition) and string quartet, and also for string quartet alone (2014).  Listen to "Raak (Calligraphy No. 15)" and "Ormavi (String Quartet No. 4)," both nicely played by the Carpe Diem String Quartet. Then listen to all of it again and you no doubt will begin to hear how it comes together with an original flair that is by no means a given but dependent on Reza Vali's sensibility and genuine talent.

I most certainly do recommend this one for those adventurous souls looking for a different take on the World-Classical nexus, those who love Persian Classical, and Modernists who would welcome another solution to today and yesterday, here and elsewhere sorts of things. Bravo.

Posted by Grego Applegate Edwards at 7:06 AM