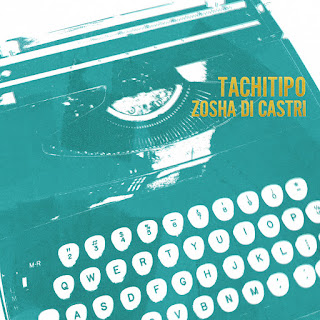 Who is Zosha di Castri? She is a living composer, someone in the Contemporary Modern camp in her own way. A portrait album of a cross-section of her work has been out since late last year and it is a very worthwhile program. Tachitipo (New Focus Recordings FCR227) has been on my blog playlist this past week. I am glad to post on it today.

There is a good deal to like in this portrait, some six works by various performers and configurations.

The title piece "Tachitipo" (2016) is the most lengthy of the works at 24 minutes. It is scored for two pianos, two percussionists and electronics. There are machine-like, automata-like passages for dampened or prepared strings on the piano and percussion parts working together for something one gladly rises up to encounter in one's listening mind. They are like islands scattered among more fluid oceanic expressions, the latter "quasi-improvisatory textures featuring microtonal washes of pitch," in the composer's words.  The contrasting blocks work together to leave a distinct impression of newness, of a pronounced virtuosity of sonarity. Like the 1823 Italian typewriter model for which the work is named it proceeds, the composer suggests, "one key at a time," or in other words in sectional steps. Yarn/Wire perform the work with enthusiasm and imagination.

Chronologically the album opens with an a capella vocal work "The Animal After Whom Other Animals are Named" (2013) for six voices and electronics. It is one of the more diffuse pieces and the vocal group Ekmeles jumps into it all with a flourish and a relish. The work looks at aging, of the voice and the human being as a whole.  I am not sure I would have started the set out with this one, only because it demands a fair amount of concentration on the part of the listener, but like all New Music one should pay attention from the first, so no matter.

The following "Cortege" (2010) for 13 musicians  thrives in the lively reading given it by the Talea Ensemble under Lorraine Vaillencourt. It according to the composer came out of an inspiration involving a procession, a strange, "relentless succession of people and sounds." The piece is filled with rollingly explosive interactions, each a part of the passing scene, as if one were watching a parade from a window. It also gives the feeling of "impending loss," as on the eve of a city falling into enemy hands or the inexorable loss of a lover as Zosha suggests. The work is quite exemplary of a thoroughgoing Expressionism that never flags and continually morphs.

Enter next the JACK Quartet, who handle di Castri's "Quartet No. 1" (2016) with a flair. The resulting tumultuous music rebounds off the imagination-receptive ear quite nicely. Virtuoso parts, deep energetic forays and a sense of cosmic proportions makes this one a good starter if you are auditioning the album. It is very idiomatically string-oriented, boisterously alive, a great example of how the string quartet continues to be a context where the more serious gestures can flourish.

The complexities and dash of the solo piano "Dux" (2017) rivets the attention, then keeps it centered on itself throughout the 11:40 performance time. It contrasts the extremes with the middle registers as a wide-ranging whole and places definite demands on pianist Julia Den Boer that she tackles with heroic intensity. This is beautifully wild piano music that gets the adrenaline going.

Finally there is "La forma dello spazio" (2010) for a quintet of flute, clarinet, piano, violin and cello. Rising to the occasion is the International Contemporary Ensemble under Vaillancourt. The performers are to be auditorally placed about the room or soundstage, expressing movement against stasis as would a mobile. Each instrumentalist is given a flexibility within a set kind of continuousness. The happy whole has dynamic thrust and a hypnotic meditativeness.

So there we have it. Zosha di Castri shows herself in this album to be a voice of definite originality and talent, an imaginative and inventive force. The performers give the music their rapt attention and expressive zeal. Highly recommended for those New Music followers ready for something very new and invitingly expressed.

Posted by Grego Applegate Edwards at 8:27 AM