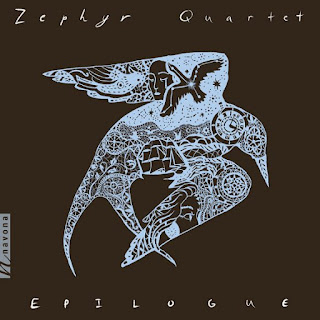 The Zephyr Quartet tackles nine works with a pronounced stylistic leaning towards a New/Radical Tonality on their album Epilogue (Navona 6275). What is most notable and unusual is that all nine works were written in turn by each member of the quartet (Kleinig, Geniert, Tulloch, Thomas). Remarkable, perhaps even more remarkable is the unity in concept of all the works. They differ sufficiently to gain a true individuality but they also have in common folksy-cum-primal meta-pop diatonic roots both lyrical and earthy. The Australian quartet realizes each of these works with the right mix of passion and precision, bringing out the nuances consistently and invariably.

Here follows a little run-down of  the music and something of what it is all about:

Hilary Kleinig, "Great White Bird"--a drone with harmonics opens and the cello plays a folkish sort of expression overtop that, then a violin takes up the strain while the cello begins an ostinato motif and the melody takes off further,  harmonized and made rhythmic.

Belinda Geniert, "Femme Fatale"--three short movements contrast, the first an unfolding arpeggiation that evolves into an evocative sequence, then a second section with vivid melody over pizzicato strummings, then a third part with vivid contrast, etc. Two further movements provide lyrical freshness, new developments among extensions of the initial material, and on we go.

Emily Tulloch, "Our Lovely Star"--an ostinato counterpoint that has plenty of charm.

Jason Thomas, "Mulysa"--opens with a folk drone underpinning a simple but expressive melody, then a pizzicato waltz ostinato with a more lively folk-fiddle melody, etc.

It is music of a rooted simplicity that turns out to be complex and varied enough to hold up under repeated hearings. If you meet this music on its own ground it is a very happy listening experience, not tedious as such things might be in lesser hands. It is folksy enough to remain continually unpretentious and unassuming, yet giving out with inventive content and lively execution.

This is good music, well played. It may not be exactly what you might expect from New Music but it goes where it goes nicely and does what it does quite interestingly. Give it a listen!