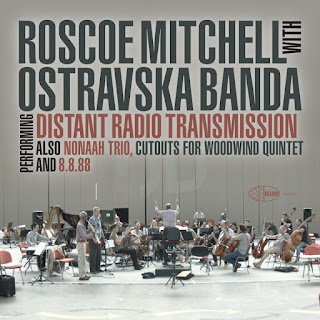 Chicago's Roscoe Mitchell over his long and extraordinarily productive career has shown himself to be among the very greatest innovators as saxophonist, multi-instrumentalist, Free Improvisation-Free Jazz artist and New Music-Jazz Composer of the present Modernism. He is surely destined to be remembered as a key member of the iconic AACM Art Ensemble of Chicago. But there has been much more to him as well. The eclectic and intelligent compositional-improvisational superlatives that have come out of the AEC band over its long tenure as a top avant contender has been paralleled by Roscoe Mitchell's continuing career as vibrant soloist and bandleader on his own.

Yet as important as all these things have been, his output as composer in the New Music realm in time may well be considered of proportional importance some day in the future, if not now. There have been far fewer documentations of this aspect of his music on disk. Happily we have a new recording that nicely covers some of that--Roscoe Mitchell with Ostravska Banda Performing Distant Radio Transmission (Wide Hive WH 0347).

The centerpiece of the program is the title work, "Distant Radio Transmission," as played by the 33 member orchestra Ostravska Banda conducted by Petr Kotik, featuring Roscoe Mitchell improvising on sopranino sax. Baritone vocalist Thomas Buckner has a prominent expressive wordless vocal part which seems to make sense in the context of the whole but seemingly also involves some spontaneous improvisational aspects. Mitchell and Buckner interact in some rather astonishing ways at any rate.

The complete genesis of "Transmission" is rather involved. It took birth originally in the form of an improvisation recorded by Mitchell, Craig Taborn and Kikamju Baku in 2013 (released as part of the CD Conversations 1). That segment was transcribed by Stephen P. Harvey in 2016. John Ivers then transcribed and did an initial orchestration of Mitchell's "air sounds for Strings" the following year. Finally the whole of it was orchestrated by Mitchell and comes to us in this final form.

There is a pronounced harmonic and melodic diffusion to the work, which is heightened by the bright sound colors in the orchestration. It is a testament to the initial inspiration of the made-music, of how to collectively and freely make sense spontaneously and then how that initial impetus can take flight again as a completely new progeny when orchestrated. The logic of the group improvisatory gesture remains but the music reshapes as an incredibly superorganic beast of multi-dimensions, starting first with the electronic exotics of James Fei and then involving the amassed forces with ensuing dialogues overtop that--for baritone and sopranino sax. Protracted listening brings out the beauty of the complexity and as one re-listens it so also heightens the logic of the multivaried expression. It is brilliant music!

The three chamber works that follow "Transmission" are by no means filler but instead add a great deal of pivotal New Music and open us happily to further musical adventures.

"Nonaah Trio" for flute, oboe and piano take off from Roscoe's 1971 solo sax work and makes of it an entirely new through-composed sequence for trio that retains some of the cyclical assertions of the original but then builds fleshed-out expressive bridges to a chamber whole.

"Cutouts" (for Woodwind Quintet) comes to us as a result of a 1981 commission.  This version gets completely worked through via conventional notation and special symbols to indicate harmonics and other extended techniques. It is a full-fledged work of importance, and it grows in your musical imagination the more you hear it.

"8-8-88" in three movements brings to us the digital reproduction and multiplicationj of piano techniques via the Yamaha Disklavier, allowing a density and velocity that would not be available in the conventional piano-pianist situation. It is played-recorded-programmed quite excitingly by Seth Horvitz. It was composed by Mitchell from 8-8-88 onwards, originally for Joseph Kudera. The result is extraordinary music of great complexity, painstakingly composed by Roscoe over a long period. The first movement alone took ten years to complete to the composer's satisfaction. It is a masterful work, a wonder to experience.

This volume should do much to help extend our knowledge and appreciation of the Mitchell New Music oeuvre. It gives us some critically advanced examples, excellently played in vivid soundstaging.

It is a new but essential contribution to our New Music Modernist cannon in my opinion. All who want to know what has been happening that's good should listen closely. Bravo!
Posted by Grego Applegate Edwards at 11:50 AM