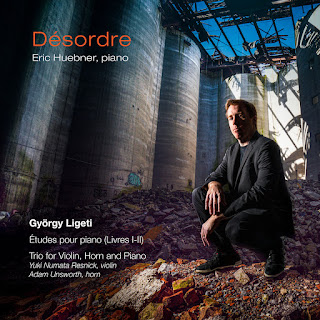 Desordre is the title given to pianist Eric Huebner's  album of Ligeti works (New Focus Recordings FCR 269). So then, "disorder."  It's all about several multi-part works that mark Ligeti's early '80s change in stylistic focus. The liner notes to the current album describe how Ligeti had tried to return to Hungary from exile and establish himself as a composer rooted in Hungarian identity.

When that did not take he changed his aims decidedly with the 1982 "Trio for Violin, Horn and Piano,"  which went in a sort of deliberate multi-directionality that included a re-thinking of Romanticism to suit Ligeti's intentional  diffuseness, suggested at first blush with the 19th century poet Eichendorff and the sounding of a natural horn from a mysterious fairytale of forest and storybook expression. It related to Ligeti's experience of hearing the alpenhorn in the mountains of his childhood. It captured a feeling of homesickness, suggest the liners,  more so than one of national pride or feeling for the homeland, instead a feeling more of displacement, perhaps.

The chronologically following two books of "Etudes Pour Piano" in turn were inspired by the piano works of Chopin, Scarlatti, Schumann and Debussy. It was from the pianistic and virtuoso qualities of their concepts of playing that Ligeti found new inspiration, something that these magnificent Etudes reformulate in their own very original way.

And so we have in this program very poetic and pristinely clear performances of some extraordinarily complex and widely influenced works. The liners mention in addition to what I've brought up above the additional influences of Eastern European folk, plus Jazz harmonic and piano stylistic aspects from Bill Evans and Thelonious Monk. Finally we feel the weight of sensory-motor mechanics as a nexus of piano and pianist with compositional inerventions that heighten drama and create a marvelous sense of motility that has its own original kind oi virtuosity and still sounds completely Modern in the capital /M/ way.

Pianist Eric Huebner and his associates for the trio--Yuki Numata Resnick on violin and Adam Unsworth on horn--all furnish the realization of this extraordinary music with a sure sense of meaningful phrasing, of a gestalt wholeness that makes perfect sense of the totality of expression.

Posted by Grego Applegate Edwards at 10:26 AM