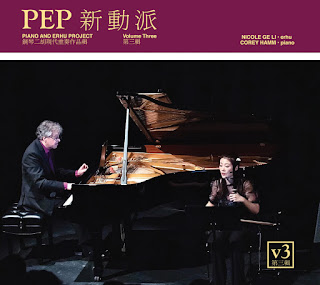 A most unusual and rewarding Vancouver-based duo called PEP, or The Piano and Erhu Project, returns for a Volume Three (DMR Discs TK 474). It is the potent and accomplished pairing of Nicole Ge Li on the traditional Chinese bowed erhu and Corey Hamm on piano. Their artistry is nothing short of superb and the choice of works genuinely inspired.

Something remarkable is the intensive focus mostly on Western Modern Classical possibilities, much of it in the realm of the new.

There are a number of specially commissioned works. They are notable and memorable. Somei Satoh, Lucas Oickle, and Gao Ping's six movement "Ho Yan" from 2017 has tremendous rhythmic vitality and a very attractive and dramatic Chinese-meets-Modern-Classical orientation. The piano is partly prepared and at times keys are dampened to get a percussive frisson going that is taken up in turn dramatically by Nicole Ge Li, Other movements have an expressive pungency, rhapsodic heat and/or a lyrical corner that contrast well as a sequence.

Another high point of the commissions is the Michael Finnissy "Sorrow and its Beauty," which soars meditatively and with a probing poignancy. It haunts and the erhu tone color shines with luminescence thanks to Nicole's expressive brilliance.

Marc Mellits' "Mechanically Separated Chicken Parts" is a rousing minimalist oriented romp that invigorates as it moves with a most pleasing zeal.

The program reaches its penultimate stage with Gabriel Prokofiev (Sergei's grandson) and a nicely constructed and songfully projective "Three Pieces for Erhu and Piano" (2015). Lyrical passages contrast with rhythmically energetic sojourns that put the duo through its paces ravishingly.

A fantastic way to end is with Sergei Prokofiev's erhu-piano rendition of his Scherzo from the "Sonata for Flute" (later he did a version for violin and piano). The intricate solo part and beautifully energized piano seconding come through remarkably well and confirm Nicole Se Li as a true world-class virtuoso and Corey Hamm as a worthy counterpart. This is excitement made vitally alive!

The program chimes in as a whole most remarkably. I will leave it to you to explore the pieces for yourself--I should also mention another one by Marc Mellits  All are worth your time surely and good examples of the Tonal Modern world that is part of the current scene. Nicole Ge Li and Corey Hamm make a vivid impression as they impress with their high artistry from first to last.

It is in every way a superior program and a marvelous showcase for the artists and the works the two make their own. It is as fine a meeting of East and West these days as you might hear, really a landmark disk. Li and Hamm give notice--they are not to be missed. Kudos!