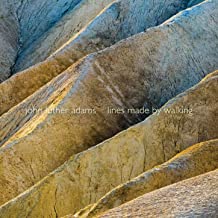 John Luther Adams over time has impressed me as one of the singular voices, one of the true originals in so-called Minimalism and Radical Tonality today. The wonderfully accomplished JACK Quartet expands our grasp of the composer with a program of two string quartets on Lines Made By Walking (Cold Blue C80058). Featured are two recent works, the title work from 2019 and "untouched" from 2016.

The subtle beauty of these Adams works are in the way they self-create themselves. not through mesmerizing or trance inducing but rather creating clockwork overlaps that serve to create mobiles in sound--a sort of geographics of aural space for the title cut and a lingering intervalic immersion in fundamentals that point to a timeless origin in "untouched." As with the best Adams works there is a pronounced organic natural ambiance to be savored and the JACK Quartet show us they know how to project the whole in a magically living resonance or sonic luminescence and transcendence.

It is another very worthy Cold Blue release, a triumph of great performances and cutting-edge composition. If you want to get a handle on what is very new in New Music out there it is a CD you'll want to have and hear in depth. Kudos!