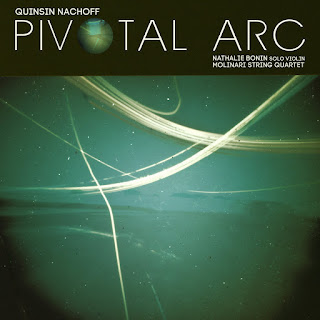 Musical creativity when going right is like a liquid that flows outward and downward from a starting point, filling in where there is space for it. So that is the case for the music of Quinsin Nachoff on his recent album Pivotal Arc (Whirlwind Recordings WR4761). It features three compositions that dwell nicely in the interstices between Progressive Jazz and New Music.Classical. What makes it especially worthwhile is the easy-going compatibility between the two forms, mediated by a kind of folk-world melodic flow and a creative immediacy that marks it as something new.

Quinsin plays a very limber and lively tenor sax which we hear most winningly on the title work. That piece also gives productive solo time to bassist Mark Helias and drummer Satoshi Takeishi, and so also vibraphonist Michael Davidson. All this is set against some very adventuresome writing for a big band/chamber orchestra of winds and strings conducted by JC Sanford.

The big band gets into a folk dance, Piazzola-like idiom and also a sort of advanced straight post-funk in a Dave Holland or M-Based related furtherance that allows violinist Nathalie Bonin to shine forth in a nicely wrought solo part. Beautiful stuff! The middle movement is a lovely landscape that the composer notes rightly is "where Berg meets Ellington!"

What startles then pleases is the breadth of absorption of multi-stylistic strands into a convincing series of wholes. There is a fully "authentic" and uncompromising nexus of both styles and performances are top notch. And the end results are fully original and well worth repeated hearings.

It is one of the best examples of what used to be called "Third Stream" that I've heard in a long while. Kudos to all involved!

Posted by Grego Applegate Edwards at 10:00 AM