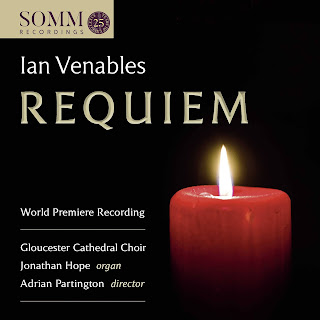 Living composer Ian Venables composed his Requiem (Somm Recordings 0618) in several stages between 2017 and 2018, initially at the request of his friends Bryce and Cynthia Somerville to commemorate their late mother Doreen. It was performed by the Choir of Gloucester Cathedral under Music Director Adrian Partington. The world premiere recording that we consider here features the same choir and director in a nicely recorded and moving performance.

The work shows a natural sympathy towards the satb sound possibilities and a general diatonic, lyrical manner which is well constructed and appealing. Organist Jonathan Hope realizes the instrumental part with subtlety and warmth  This is music that revels in consonance and concordance--yet it does not strike one as particularly backward looking.

As a bonus there are four additional short sacred choral works that supplement the program and further our ear pleasure--compositions by John Sanders (1933-2003), John Joubert (1927-2019), Ivor Gurney (1890-1937) (edited by Venables) and a final Venables capstone work that springs forward rhythmically and sends us off in happy ways..

This is a beautifully performed program. Kudos to the soloists and choir, kudos to the director, to the organist, to all involved. It is not a program of ultra-Modern things. Nor is it a deliberate stepping back. It is the very successful determination to craft a straightforward lyrical consonance that stands on its own feet and can take us on flights to musically memorable and uplifting heights.

Posted by Grego Applegate Edwards at 7:58 AM