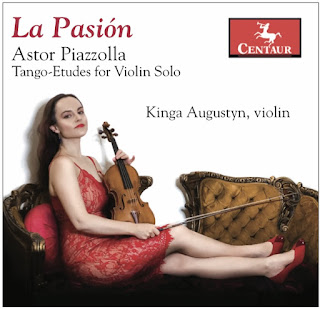 Some music combined with some performances seem perfectly right. And when you come across such things it is a confirmation that the world may be upside down in many respects yet music somehow makes it right even if only for a brief time, i.e., not an entire evening or such, just as long as the music is meant to last.

That is the case with a short album I've been enjoying recently. It is performed wonderfully well by violinist Kinga Augustyn. Type her name in the search box above for some other reviews I've done of her albums, some just a few days ago.

In is something very nice by Astor Piazzolla, namely La Pasion, Tango-Etudes for Violin Solo (Centaur). What's rather remarkable about these six etudes is how they manage to partake of a Tango atmosphere-adventure yet they often spin away from any very overt expression of the continual rhythmic insistence a regular Tango would need to have to be danceable. Instead they sometimes weave themselves in and out of such considerations via rubato and fractional structural-segmental pauses that put the music in a different place. And in so doing Piazzolla and Kinga suspend dance time as we might conceive of it and instead fall nicely into violin solo unaccompanied virtuoso expressions in which one recognizes readily a Piazzolla elan, something that sets him apart from virtually any other composer.

Much of this "halfway-here, halfway-there" quality works especially well in the way that Ms. Augustyn straddles the "Tango/not Tango" qualities of the writing. It is a pairings of composer and performer that stands out, that seems ever-fresh no matter how many times one listens.

So I do recommend this one heartily. Kinga comes through again.

Posted by Grego Applegate Edwards at 8:31 AM