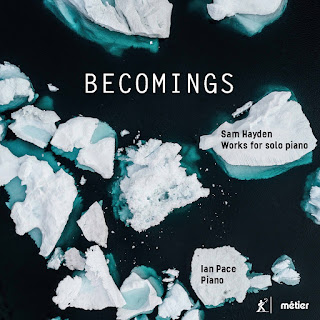 Music is like life. You may think you know a lot about it, but then the future has things in store and you cannot quite know what. With music (and with life) that can be a good thing of course. So I try and maintain an open stance, to be ready for whatever comes.

Today's offering is one of those happy surprises one can experience. It is a two-CD set covering the piano music of Sam Hayden, as played extraordinarily well by Ian Pace. Becomings (Metier 2-CD msv 28611) covers the title work as disk one and three shorter works on disk two. It all has the adventuresome sort of High Modernism dash that situates pianist and instrument on a heroic and dynamic series of journeys that keep the listener challenged and well rewarded with exciting fare. It comprises to date Hayden's complete works for solo piano and as such the first recordings of same.

The stylistic territory occupied by this music has a deliberate, free spontaneity feeling, Expressionist but also open-cosmic, in a varied a-rhythmic attack that perhaps owes something or overlaps at any rate to the later improvisations of the great Cecil Taylor--it is deliberately irregular and not overtly periodistic for the most part and does not deliberately stress a key center most of the time. It sometimes also recalls some of John Cage's star chart works--for its complexity, its vastly expansive, counter-intuitive set of possibilities that then become logically conversational as a musical language, happily.

The final work in the set, "Piano Moves," for amplified piano,  has a jagged, ragged, primally dissonant, mesmerizing  insistency that marks it off as singular. To get maximum effect one should let the music take over your situation for its 24 minutes.

"Becomings (Das Werden)" bring us seven sections and a very motionful a-rhythmic atonality that has a virtuoso level of unexpected yet especially continual  morphing that Ian Pace handles with high artistry and sensitivity.

The remaining two works on disk two, a short "Fragment (After Losses)" and the longer "...still time..." have more of the open unpredictability in motion as we hear on the title work. "Still time" has a hushed quietude that unwinds in a nicely post-Feldman poetic way. Then it breaks out with more energetic and expressive loudness before leaving more quiet rumination to contemplate.

This set will appeal to all pianistically oriented Modernists out there. Hayden is the genuine article and I hope we can hear more of his music in future releases. Good show!