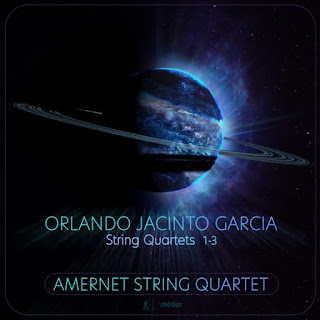 Cuban-American composer Orlando Jacinto Garcia writes music that aims to suspend time. This according to the liner notes on the recent offering String Quartets 1-3 (Metier msv28613). The Amernet String Quartet perform all three quartets with care, precision, and understanding. And time becomes relative with close listening, or at least that was my experience.

Garcia was born in Cuba, 1954 and migrated to the USA in 1961. His compositions have received a number of awards and world-wide performance coverage.

The aural feeling of suspension in time (at least in terms of these quartets) often comes about by a very gradual unfolding of content, a deliberation that plays out bit-by-bit in each case, by repetition that involves less of a developmental processual element (as one might hear often enough in the music of Steve Reich) but instead changes and interchanges sectional elements that further the work in a temporal suspension, even if there might be rapidly expressed elements at times.

The music at its best settles into a complexly varied phrasing that repeats without haste and in the end without the least feeling of urgency. The music says its say and one finds at the end a connectivity that invites one to contemplation, non-insistently.

There are times when the music unravels like a Persian Carpet--like later Morton Feldman, where patterns repeat and then contrast with other patterns and the connectivity is a natural contiguity, a "this comes next to that" apparentness . Yet as you listen it does not sound like there is a Feldman imitation, just an affinity. And his syntax has a personal originality that sets it apart from other composers in general.

And with the repetition the term Minimalism comes to mind. Of course repetition is nothing new. As in Rock, Blues, African, European folk, some Classical, etc., to repeat is to groove sometimes, to trance, to take pleasure in the thing restated. The sort of repetition Feldman and Garcia are up to does not look for groove much, certainly, and the slowness of the unfolding brings timelessness which perhaps is the opposite of groove?

Listening here from the second to, say,  the infinite rehearing of a motif, one does not find oneself driven into the connectedness as a somatic ecstacy. It all suspends rather than re-sends. And that is fine because no music need to conform to all other related musics of course. To not groove is to allow other music to do that, and to contrast the listening self with another place to be.

If you live with this music for awhile like I have you may well find it a special thing, serious and expressive, thoughtful and in its own way a step ahead. It is sincere, intimate and a musical world unto itself, happily. Recommended.