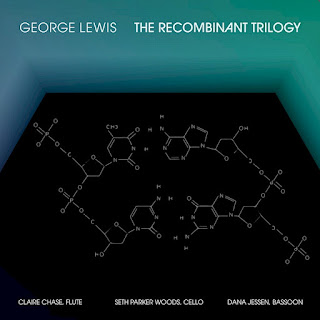 Anyone who follows the musical career of George Lewis should know his beginnings as an acclaimed improvising trombonist on the Avant Jazz scene--as a key AACM (Chicago's Association for the Advancement of Creative Musicians) member, notably making his mark in Anthony Braxton's group and on from there. In time his immersion in Electronic and New Music gave us a composer of great stature and innovative inventiveness.

I've covered gladly his music on my music blogs from the beginning of my blog posting some 14 years ago. (Type his name in the search box here and also on my Gapplegate Music Review and my Gapplegate Guitar and Bass Review. Before that I covered his releases on Cadence.)

I am glad to return with another interesting disk of his music, The Recombinant Trilogy (New Focus Recordings FCR 284). It is a further and effectively moving step toward realizing, refining and redefining the performance combination of live instrumentalists and live electronics. As the liner notes inform us, the live instrumental signal is subjected in real time to put forward "interactive digital delays, spatialization and timbre transformation" that remake the acoustic sounds of each instrument "into multiple digitally created sonic personalities that follow diverse yet intersecting spatial tragectories."

It is a matter of three pieces for virtuoso instrumentalist and electro-acoustic transforming operations Lewis appropriately and helpfully calls "recombinant electronics."

We begin the program with "Emergent" (2014), for the flute of Claire Chase and the electronic manipulation of Levy Lorenzo. The resultant music is infinitely flexible, plastic, singularly filled with human gesture yet as a magically charmed extension of the acoustic material world.

This is followed by "Not Alone" (2014-5) for Seth Parker Woods who plays cello and applies recombinant electronics to the signal himself. There is a great deal of spontaneously emergent cello in itself, a wonder to hear, but then a continual enveloping and burgeoning outward into something fascinatingly other.

Finally there is "Seismologic" 2017 for Dana Jessen on bassoon and Eli Stine on recombinant electronics. The very nature of the acoustics of the bassoon drives understandably the final electronic mélange in ways that unleash a more earthy, almost undergrounded deepness, and then a gradually rising up of emergency urgency. And in the end the synchrony and then the dis-synchrony of acoustic and electronic intertwinings stand out as the culmination of the three-pronged voyaging we travel through with interest and fascination.

In the end we get a convincing chamber tapestry of human gestural aesthetics which partake of the beautifully novel but does so with a conversational periodicity that reaffirms the personal quality of live music making while it expands the palette of possibilities for a great wealth of intention and artistry. Molto bravo. There is great spirit to these three works and so much to explore and appreciate. Recommended strongly.

Posted by Grego Applegate Edwards at 9:18 AM