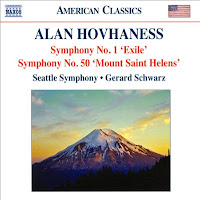 When the history of music comes to mind, especially I suppose in the classical realm, it's something like how we ordinarily think of the history of anything. It's like a giant roll of wallpaper, wide enough to accommodate what's going on that's considered important at any time, and then it's thick enough so we can start unrolling at some sort of beginning (Ancient Greece? Gregorian? What?) and keep unrolling to find a succession of styles through to today. It has in part to do with our conception of time "flying from A to B like an arrow to its target."

And there is much to be gained thinking of the history that way. Somewhere in the early '70s of last century, however, a strictly linear view of the world started to break down, if just a little bit. The idea of progress and evolution to ever greater heights became a little problematic. After Modernism, what? Well, Minimalism, for one. Then all kinds of Neo-this and Neo-that, a few that have not been formally named, even. But no clear A to B movement, as far as I can tell.

If the linear progress of composers' tackling ever more daunting complexities has broken down, we have people like Alan Hovhaness in part to thank. Of course it's never been that simple anyway. J. S. Bach was still working in an earlier style when Rococo Classicism was first stirring. Charles Ives was in some ways a father of Modernism, but he had Romantic aspects and he also created deliberate clashes between simple pop ditties or hymn tunes in multiple conflicting performance with perhaps some strident dissonances as well, and in that way looked forward to a post- situation. Lou Harrison was attracted to the musics of the East and made that a huge part of his music. John Cage in his prepared piano pieces was often something other than "Modern" as such.

Nonetheless composer Alan Hovhaness stands out as one of the prophetic figures. He turned to the music of his Armenian heritage, and later classical music of Japan and other influences, to hammer out a music that was not Modern in the sense of what was going on around him. And yet his music was decidedly not eclectic either. Every Hovhaness opus bears his unique stylistic stamp.

And so we come finally to today's CD, a recording of two Hovhaness symphonies by the fine Seattle Symphony under Gerard Schwarz, Symphony No. 1 'Exile' and Symphony No. 50 'Mount Saint Helens' (Naxos 8.559717).

The Symphony No. 1 is an important one for understanding Hovhaness the composer. It is dedicated to those Armenians who were forced to leave Turkey during a pogram situation in the early 20th Century. It's pure Hovhaness. All the things Alan was as a composer were more or less in that symphony, albeit in a less developed state. It was in melodic form, in melodic contour that Hovhaness showed his traditional Armenian influence. What he did with it was (and is) what Hovhaness is about. It's a mature work and a crucial reference point to where he began. Schwarz and the Seattle Symphony give a most sympathetic reading, as they do all the music on this disk.

In between the 1st and the 50th Schwarz interjects an excellent and representative work from Hovhaness's middle period, the "Fantasy on Japanese Woodprints" from 1965. Again, there is a melodic arch that clearly comes out of Japanese classical music. What is done with the theme is Hovhaness in pure form.

The final work comes from 1982, moving towards the end of his life. The "Mount St. Helens" Symphony No. 50 gives us very magestic music that becomes quite turbulent, then triumphantly chorale-like in the last movement--depicting the mountain in repose, then in irruption.

Like all Hovhaness, there is an archaic quality (as the liner notes point out), sometimes evoking Eastern Orthodox chant, sometimes other older forms, but here, as often elsewhere in his music there is Modernism to be heard in non-harmonic tones and pieces of dissonance, a bit of orchestral chaos. So it is never so simple.

Hovhaness does not fit into the endless scroll idea of music history, except that he was a pioneer in his use of non-contemporary and non-Western elements in forging his music. Nowadays we have Arvo Part to appreciate doing this sort of thing in his very own way. But Hovhaness was there when it was a little bit of a daring thing to do. In the end what counts of course is the music. The three Hovhaness works presented on the Naxos release at hand are very representative, very moving and enjoyable, and very well performed.