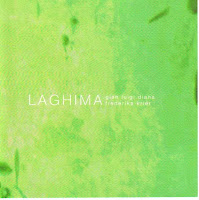 Some music doesn't go where you'd expect. Gian Luigi Diana and Frederika Krier's Laghima (Setola di Maiale SM2090) has that quality. It's free improvisation or, as they call it, instant composition that forges its musical vocabulary from the music and sounds the artists themselves hear, rather than a strictly avant or new music framework. There are electronic elements ranging from vaguely "world" or "ethnic" to soundscaping and cosmic otherworldliness, there is the African kalimba (all energized and realized by Gian Luigi Diana), and there is the wide ranging concert/world violin playing of Frederika Krier, who has some of the tensile strength of Szigeti, an avant sounding approach and a kind of declamatory rhapsodism without undue sentiment.

The album goes freely to places the artists take it according to the considered inspiration of the moment. So you may have repeating electronic motives against a threnodic sort of lament on violin, explorations of pure sound that generally maintain a tonality, and many things in between.

It's a fascinating result that needs to be heard attentively and successively to make its point. Like the album Blurboxer covered several days ago and also featuring Mr. Diana, this is music of a different sort. "Laghima" in the Sanskrit refers to levitation, becoming light as a feather. The music can do that if you open yourself to it.

Posted by Grego Applegate Edwards at 6:06 AM