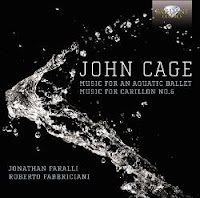 The John Cage (1912-1992) Centennial reminds us of the incredibly productive output and conceptually game-changing outlook of the American composer while he lived. There were so many different aspects of his music and what it meant, each important and influential, and in many ways we are still catching up to how far he went. This is no less true of performance realizations as it is of listener appreciation and consciousness-raising.

Both aspects are affected on the eight-work disk recently released by Roberto Fabbriciani (flutes) and Jonathan Faralli (percussion), Music for an Aquatic Ballet, Music for Carillon No. 6 (Brilliant 9284).

It's a whirlwind journey through some of Cage's unrecorded and rarely recorded works. It also features works realized in unique versions by the duo.

"Music for an Aquatic Ballet" was performed in 1938 at the National Aquatic Show in LA. The score has been lost but descriptions survive of a piece centered around tam tams and gongs played in the water in part to allow the synchronized swimmers to follow the music even when submerged. Fabbriciani and Faralli realize very freely a version for flute, percussion and tape which is in effect a re-composition in tribute to the lost work and in its spirit.

What follows are quirky, creative and quite listenable versions of works that span much of his career.

There are concrete, natural and human sounds on tape as called for, and the flute and percussion work is exemplary.

What is most important, ultimately, is that Fabbriciani and Faralli have created a memorable program of Cagean music that is fascinating and very musical. It's a fine disk and will most certainly appeal to the adventurous listeners out there, not only confirmed Cage fans.