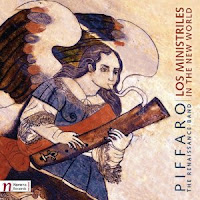 The Spanish conquerer-colonialists of the New World brought their music with them when they resettled, as all peoples tend to do. Gradually the music of the indigenes influenced the Conquistadores-settlers until some ways down the path of time a new music was born (or rather new musics in the plural).

Piffaro, the Renaissance Band, devote their time productively on their third album, Los Ministriles in the New World (Navona 5875), to the early music phase of the process of assimilation and change.

In 30 short instrumental works from the Spanish homeland and the New World a picture emerges of the musical landscape of the Spanish settlers. There are hints of influence (sometimes broad) but the unmediated listening ear (or mine) rarely if ever picks up traces of radical changes in style that would tip one off that there was a thorough musical assimilation taking place. This is understandable at such an early date in the long history of cultural co-mingling. It wan't a situation where there would be cataclysmic changes in Spanish musical culture in the New World because there was initially a conqueror-conquered distance placed between the groups.

So we have a competent early music-original instruments ensemble playing the charming miniatures with enthusiasm. The unusual nature of the repertoire makes it a valuable addition to your early music library. And it makes for a most pleasant listen.