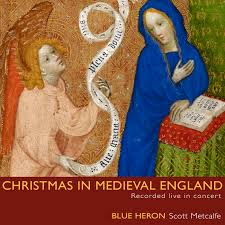 One more for the last-minute folks out there. It is the early music vocal ensemble Blue Heron and their Christmas Music in Medieval England (Blue Heron 1006), a collection of carols, music for Mass, plainchant and motets one might likely have heard in one way or another at this time of year in England circa 1440, when the last of this music was composed. We get modern early music performance practice in the ten member choral group divided into the cantus, the contratenor, tenor and bassus parts. The album sequence was as heard live in concert on various nights in December, 2013, in Cambridge, Massachusetts.

The group sounds excellent under the directorship of Scott Metcalfe. Some of the music is accompanied by medieval harp, as would have been appropriate. The texts are in Latin and English in the style of pronunciation in use at that time. So the "Hayl Mary, ful of Grace" pronounces Grace as "Grahse."

It is music that is very beautiful and performed with spirit by the ensemble. If you tend to early Christmas music or even grew up with some of it, you will doubtless recognize "Veni, veni Emanuel," "Ther is no rose of swych vertu" and "Nova, nova! Ave fit ex Eva" among others. Yet there is much that may not be familiar.

It is all fitting and rather haunting. You listen and you feel time passing. Some may have had ancestors who heard or even performed this music, but no matter if not, because this is not music of exclusion. In the same way as most in the United States greet one another with the phrase "Happy Holidays" this time of year, so this is music about the joy of the season, no matter what you subscribe to in sectarian terms. Freedom of religion is the freedom to honor the creation in the manner of your choosing, without punishment or recrimination. And so you are free to listen to this music on whatever level you choose, with the idea that the music reflects an important period in the history of Western music, as so in the world at large with musical traditions centered around religion in so many various ways.

Perhaps more to the point at hand, this is a beautiful selection of music that does not even begin to exhaust what has survived of the period, yet it provides an excellent sampling of the various genres in play during the times.

Blue Heron is a fine group and they sound quite inspired on this album. Highly recommended! Happy holidays!