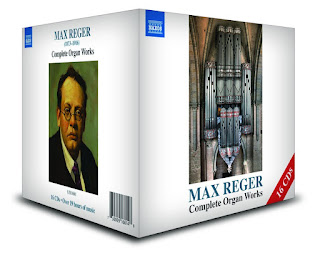 We have in composer Max Reger (1873-1916) the missing link between the late romanticism of Mahler and Strauss and the pioneering modernism of the Viennese School (Schoenberg, Webern and Berg). There are a few others like Zemlinsky but no other who created such a gigantic output. Reger managed to combine the rigor of contrapuntal JS Bach with radically chromatic approaches that put him firmly in a new era in ways not quite like anybody else.

The Bach connection is nowhere more strongly felt than in his Complete Organ Works (Naxos 8.501601 16-CDs). The new complete opus recordings have been a labor of love beginning in the '90s through to today with volume after volume coming out bit by bit on various organs and with various players, all world-class.

The sixteen separate CDs cover everything Reger wrote for solo organ. He establishes himself as no doubt the greatest German organ composer since Bach, a clear alternative to the French School of organists which continued to flourish in his day, at times no less symphonic than they in his long form excursions, but then more at times an expansion of the multi-voiced fugal complex creator within the Bachian heritage.

Not everything in this set is a masterpiece, of course. Reger sometimes composed according to functional need, and there are some works designed for the parochial organist of medium accomplishment, arrangements of the many chorales that formed an important part of Lutheran Protestant church music. But then there are also some masterful transformations of chorales as theme and variations, as fugal subjects and the like.

There are some stunning toccata and fugues, preludes and fugues, trio sonatas and a great deal else. It is an abundance of riches with some somewhat more mundane works interspersed through the set. They are made up for by the sustained flashes of brilliance that are here in abundance.

This may be more organ music than some people are ready for, but those that wish to know the significant features of Max Reger's total output will find this very illuminating and genuinely moving. It is here that we encounter Max Reger's genius, here and in the best solo violin and cello works, the orchestral creations, the chamber works most intent on combining chromaticism and counterpoint to varying degrees.

Performances and sonics are uniformly first-rate. This box set gives great illumination to all who appreciate Reger, but also to all who appreciate the concert organ and for those who seek a proto-modernism which is also a glowing tribute and updating of the Bach heritage. If this feels like a part of your musical calling, treat yourself to this abundant fecundity by all means!