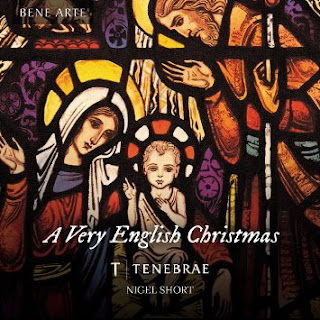 For those with a last-minute need for something nice for the Christmas season, this is just in: the choral ensemble Tenebrae and their latest, A Very English Christmas (Bene Arte 902). It is a collection of compositions and re-arrangements of Christmas Carols by 20th century English composers.

First off, Tenebrae sound glorious. They as amassed choir (sometimes with organ accompaniment) and as soloists are nothing short of angelic, and they go a long way in establishing a beautiful sonance that make the new material come alive in the best holiday tradition.

The music provides the listener with some exceptional alternatives to the usual fare, with a few rearrangements-reharmonizations like "I Saw Three Ships," but mostly altogether original carols, many in settings with traditional texts.

So we get five beauties by Peter Warlock (someone I've been appreciating more and more lately), plus gems by Simon Preston (you probably know him as organist), Arnold Bax, John Gardner, Philip Radcliff, Paul Edwards (no relation, that I know of), Philip Ledger, and others. Many of these names may not be well-known to you, or known as conductors or organists, but all come through with movingly nice modern carols, some with a bit of the spice of modern harmonies, but all in the choral carol tradition.

If you are like me, if you seek far and wide to expand your knowledge of carols through extensive spatial and temporal realms, wherever you can go for good and great examples, this will be a boon. Even if not the music will captivate and beguile you.

This one is a knockout on all counts. Grab a copy!