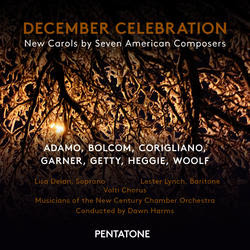 Classical music listeners who want more than the standard holiday music fare don't always find a great deal to chose from. Of course there is Handel, Bach, early music, Pavarotti and other famed singers in holiday programs, various cantatas and Gregorian Chant, Liszt, Saint-Saens, but of contemporary modern compositions (and arrangements), there isn't much. Britten. Menotti. Cannot think of a whole lot else. This year there is something truly new in that realm, however, that is worth your time: December Celebration, New Carols by Seven American Composers (Pentatone 5186 537).

It features soprano Lisa Delan and baritone Lester Lynch along with the Volti Chorus, Musicians of the New Century Chamber Orchestra and Steven Bailey, organ and piano, all under the direction of Dawn Harms.

We get some very familiar carols scattered among modern-contemporary ones. So there is a nice arrangement of "Silent Night" (Gordon Getty) and some other chestnuts like "Good King Merrily on High" (aka Ding Dong...) but mostly new music from Mark Adams, Jake Heggie, Joan Morris & William Bolcom, David Garner, Luna Pearl Woolf, Gordon Getty and John Corigliano.

Delan's vibrato takes a little getting used to but after a bit that melds into the overall performances, which are very respectable and spirited.

This (of course) is not avant contemporary but tonal and carol-centric with a little nutmeg for your egg nog. It is a Christmas album that needs close listening at first, because after all the music is mostly very new. But after a couple of listenings it opens up and you find much to appreciate.

Doubtless this will not garner the performers a Grammy. but it is very well done and in the end gives you blessed relief from the continually recycling standards. There is much to like. A balm for jaded ears, this is. Recommended for good ears grown weary on the usual.