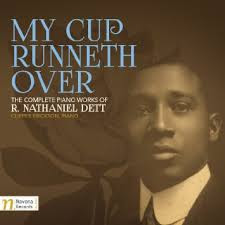 Afro-American composers in the US in the early modern period? From the jazz realm we of course have many, Jelly Roll Morton and Duke Ellington come to mind readily and happily. There is of course Scott Joplin . . . and William Grant Still from the classical realm. Now we have the chance to hear the music of another, Robert Nathaniel Dett (1882-1943), his complete solo piano music, on the new two-CD set My Cup Runneth Over (Navona 6013). Clipper Erickson takes on the music as the pianist and brings it all to life for us.

The music in first blush has the tang of impressionism in its harmonic and melodic intricacies, but ultimately there is a depth of originality that comes out as you listen further.

He was a pianist, teacher, choir leader, poet and writer. His book The Emancipation of Negro Music was well received and won him a literary prize at Harvard in 1920. He was the first Afro-American to graduate from Oberlin, concentrating on piano and composition, in 1908, and got his Masters at Eastman in 1931. His career was distinguished, yet somehow his music has fallen by the wayside until now.

His first composition efforts reflected the salon style then current but also incorporated ragtime and dance music elements. But he experienced a kind of awakening when "suddenly it seemed I heard again the frail voice of my long departed grandmother calling across the years; and in a rush of emotion that stirred my spirit to its very center, the meaning of the songs which had given her soul such peace was revealed to me."

From that point on his music often incorporated traditional Afro-American folk elements, from spirituals, which he made great efforts to preserve and promote, and other roots.

There are contrasts to be heard with the deeply involved treatment of such elements in the "Eight Bible Vignettes" of 1941-43 and the more straightforward Joplinesque rag treatment of "After the Cakewalk" from 1900.

We in the end get a composer whose voice, though perhaps stilled for years, seems right for renewed attention and revival. R. Nathaniel Dett in his mature period is a fully individual, fully original composer of his time. The two CDs of My Cup Runneth Over give us a composer of stature. Thanks to Clipper Erickson for providing us with fine performances and resurrecting Dett's music for us to appreciate anew. Perhaps now we can hear Dett's choral compositions?