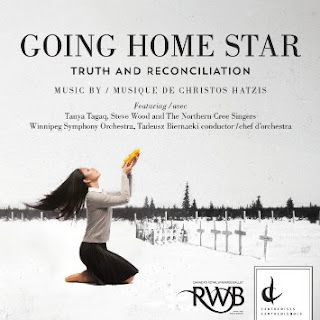 Today a most unusual ballet score, Going Home Star, Truth and Reconciliation (Centrediscs 22015, 2-CDs), composed by Christos Hatzis for the Canada's Royal Winnepeg Ballet 75th Anniversary production choreographed by Mark Godden, script by Joseph Boyden. It centers around the development of the Indian reservation schools in the area.

Using traditional Indian music by the Northern Cree Singers, Tanya Tagaq singing traditional Inuit game songs, sound effects, electronic alterations, and the Winnepeg Symphony Orchestra under Tadeusz Biernacki, along with the recitation of Native American texts describing some native lifeway details set against the dysfunctional and often cruel treatment by the Missionary schoolmasters, we experience a disheartening story that ultimately ends in "recognition, truth and reconciliation."

The music is a dramatic pastiche of Indian song, Inuit game vocals, hymn tunes, a snippet from the "Rites of Spring" and an otherwise vibrantly moving and eclectic orchestral melange in a sort of postmodern vein.

The story revolves around Native American protagonists Annie, hairdresser and party animal and Gordon, a homeless man and trickster figure. They find each other and in turn we experience a flashback to their harrowing and bewildering childhood first in a traditional setting and then in the hands of the missionary schools. It tells the story of the desperate struggle to realize identity while negotiating their way through the White Man's institutions.

The score is understandingly subordinated to the story line of the ballet but as heard here in the recorded context has dynamic thrust and a combination of modern contemporary (tonal) elements, archaicisms and Native American authenticity, all joined together in various sequential ways.

It most certainly attracts and retains your attention with its shifting and often enough flexibly rhythmic dynamics. It holds its own in the continual juxtapositions that no doubt are ramified by the actions of the dancers in the ballet settings.

The music has a quirky kind of dramatic presence that is both inventive and at times pictorially literal in its audio backdrop to the dance events. There is much to experience in this music that stays in the mind.

In the end it may not be the essential ballet music of this yet-young century. But it is very engaging and original in its widely eclectic approach. Give it your ears.