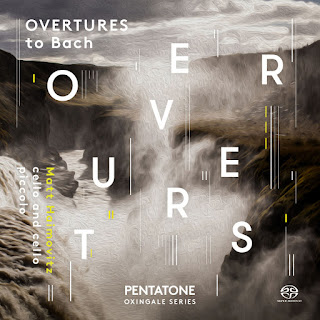 If you do not know, Matt Haimovitz is that enormously talented, accomplished and daring more-or-less young cellist who has embarked on a series of brilliant, genre bending cello albums that I have covered on this blog--many of them anyway. Even though I awoke this morning with the musical theme from the Bugs Bunny Show playing in my head ("On with the show, this is it!"), Matt's latest is a bit more serious, to say the least. (But then Bugs Bunny was seriously funny, so....)

It is called Overtures to Bach (Pentatone Oxingale Series 5186 561), and fittingly so. The Prelude movements from Bach's six Suites for Solo Cello form the cornerstone of the album. Each of the Preludes are wondrously performed, but as a kind of answer to six newly composed cello solo works meant to pay homage to and comment upon the essence of the solo cello Bach.

So we get modern yet absorbingly timeless works by Philip Glass, Du Yun, Vijay Iyer, Roberto Sierra, David Sanford and Luna Pearl Woolf. Many of the works make rather extraordinary technical demands on Haimowitz and of course he is very much up for the challenge. But then a proper interpretation of the Preludes demands no less.

Once you relax your expectations and listen with naked ears it all becomes a part of a whole, of Bach and what he brings to us today, of modern contemporary works today and how they channel Bach in contrasting fashions. The modern works were written, especially commissioned for this project and so enjoy their world premiere recordings.

After a few listens everything flows together marvelously. It's another considerable feather in the Haimovitz cap. He is one of those special forces on the contemporary scene and as usual he gets you to hear differently while also bringing to us his unparalleled musicality.

For those who love Bach and/or for those firmly involved in new music listening, this one is a most fascinating revelation. I wholeheartedly recommend it.
Posted by Grego Applegate Edwards at 5:22 AM

Email ThisBlogThis!Share to TwitterShare to FacebookShare to Pinterest
Labels: matt haimovitz overtures to bach gapplegate classical-modern review, modern solo cello works meant to be heard in tandem with the preludes to bach's suites for solo cello