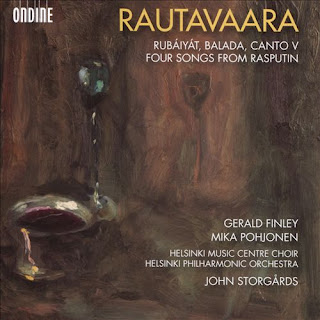 Einojuhani Rautavaara no longer lives. 1928-2016 will forever be put in parenthesis now, after his name. He was one of the world's original voices; sadly he will speak to us now only in the past tense.

I happen to be listening to a new one of his, a vocal-choral-orchestral compilation that includes Rubaiyat, Balada, Canto V, Four Songs From Rasputin (Ondine 1274-2). All are recent works, 2012-2015, and so a modern lyrical tonality prevails with pronounced modern touches now and again. The Helsinki Philharmonic Orchestra under John Storgards prevails in very good form. The Helsinki Music Centre Choir hold forth convincingly on "Balada" and "Four Songs from the Opera Rasputin." Baritone Gerald Finley makes a wonderful showing on "Rubaiyat," for which the piece was commissioned, and Mika Pohjonen is very effective as the tenor soloist on "Balada."

All the works have the Rautavaara touch. The four songs from "Rasputin" have something of a folk feel, but also the melodic periodicity of Rautavaara in his later period.

"Canto V, Into the Heart of Light" is a purely orchestral work, rhapsodic and rather impressionistic-modern in Rautavaara's own way.

The "Rubaiyat" is based on FitzGerald's English translation of the ancient Persian poem. It dramatically accentuates the mystical content with both exuberant melodic declamations and more subdued mystical touches. Finley has just the right mix of dramatic and lyrical. The music has a searching quality fitting to the poem's introspective reflections.

"Balada"  was originally intended to be an opera, "Ballada Lorca." The composer was not able to complete it due to illness, but this scene happily survives.

It is music that comes alive on close listening, well performed, perhaps not among Rautavaara's primary masterworks, but a valuable addition to our knowledge and appreciation of the last period.

Recommended.
Posted by Grego Applegate Edwards at 6:02 AM