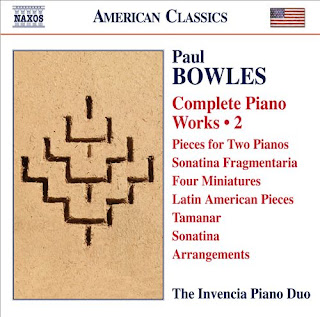 Before Paul Bowles (1910-1999) was known as a major creator in the literary field he was gaining a reputation as a classical composer of promise. His migration to Morocco and turn to writing more or less put a halt to the composer part of his creative life, yet his compositions are special and original. The Invencia Piano Duo brings to us the playful brilliance of his one- and two-piano works on the first and now the follow-up volume Complete Piano Works 2 (Naxos 8.559787).

I covered the first volume several months ago (see index search box above) and was taken by it. Volume 2 shows no drop off. The mostly miniatures, two arranged for two pianos by Gold and Fitsdale and Invencia member Andrey Kasparov, respectively, all have a special neo-classical modern, sometimes folkish charm that evokes middle-period Stravinsky and the piano music of Milhaud and Honegger, but then reasserts an "Americana" feel at times too, with occasional ventures into local vernacular and early jazz influences.

The performances are beautifully idiomatic, capturing the brittle character, whimsicality and subtle power of the music.

At the Naxos price, you probably should get both volumes, if you have even a passing interest in 20th century modernism in the USA. Bowles might well have become a fixture in the music had he not gone on to develop his other brilliance as a creative writer. Nonetheless these works show a full maturity of outlook and a special charm that puts them in a category of one. Bravo!