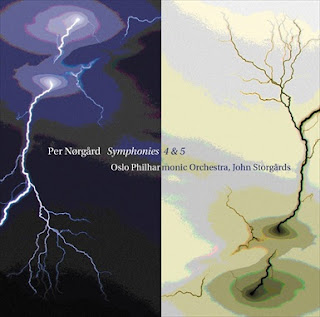 In the development of modernism in the 20th century, some composers changed the music event structure of their compositional presentation, so that the usual horizontal axis of the unfolding of a movement or work was essentially stood on its head. The music unfolded in time, of course, but the musical events emphasized more than ever a series of vertical complexes, the equivalent of a series of skyscrapers on an urban landscape. That is not to say that harmony was emphasized over melody, but that a series of simultaneities were the focus. The music of Xenakis is a prime example of this sort of thing, as was Penderecki in his avant phase. Perhaps you could go back to Varese for the beginnings of this way of thinking, though the horizontal plane was still an important part of the experience. Stockhausen's Gruppen also comes to mind.

Add to this other composers that followed, Per Norgaard being a great example in his Symphonies 4 & 5 (DaCapo 6.220646), enjoying a new version by the Oslo Philharmonic Orchestra under John Storgards.

Symphony No. 5 has the most pronounced vertical axis, but it is present at times in No. 4 as well. Norgaard's exceptional sound sculpting orchestrational scoring of both works is something that hit me on the first listen on. He quite clearly put some thought and creative intuition into the sound blocks he was building and the ever evolving series of event structures are as a result stunning much of the time and quite original at that. You hear more "connecting tissue," melodic segues in No. 4 and so on that level at least perhaps No. 4 is slightly less radical than the symphony that follows. And so to my mind the No. 5 is more of the breakthrough work if one were to choose.

But the special attention to color is present in both works and both construct landscapes of wonderful orchestral combinations in any event. The Oslo Philharmonic with Storgards at the helm gives us the instrumental details with an exactitude yet also an expressive drive that makes these works shine brilliantly. The rugged beauty of the renditions and the inspired compositions hit me squarely in my musical face. Norgaard is seriously important to the modern developments in the recent past, I do believe, and these performances of the Fourth and Fifth will show you just why.

Serious followers of what's new in our time cannot afford to miss this one! But perhaps too anyone with an open mind will find these works provocative in most interesting ways. Hurrah!
Posted by Grego Applegate Edwards at 5:24 AM