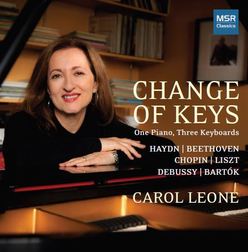 Change of Keys (MSR Classics 1616) is first and foremost a piano recital by Carol Leone. She tackles pianoforte gems from the repertoire from Haydn through Bartok. If you knew nothing else and just listened it would be something very fine. But it is more.

The standard width piano keyboard of 6.5 inches per octave has been a constant since the beginning of the 20th century and the need for mass production. And yet as the liners note the average handspan for women tends to be about an inch shorter (7.9 inches) than that of men (8.9 inches). Moreover this translates to the situation where 24% of men and 87% of women have hands not spanning widely enough for the standard keyboard. Pianists can and do injure themselves when attempting difficult stretches that are often a part of the romantic to modern repertoire. Schumann was a famous example.

In the late stages of our last century the Donison-Steinbuhler Standard keyboard introduced a modular keyboard series that was relatively easily installed on the standard Steinway, allowing the 6.0 inch octave as well as the 5.54 inch.

With the idea that the handspan difficulties increased over time as composers often called for increasingly wider stretches, Ms. Leone demonstrates what can be done when shifting over to the shorter keyboards. So she gives us Haydn's "Piano Sonata in C Major" as played on the 6.5 inch standard keyboard, then Beethoven's "Piano Sonata No. 30 in E Major" on the 6.0 inch keyboard, followed by the rest of the program (Chopin's "Ballade No. 1," Schumann-Liszt's "Widmung," Debussy's "L'Isle Joyeuse," and Bartok's "Piano Sonata, BB88") played on the 5.54 inch keyboard.

Apparently Leone adjusts with no difficulty to the various keyboards. The artistic results are what matters and each work gets the interpretive elan of Carol Leone's abundant musicality, without the strain of stretching in Promethean ways.

And in the end this is a superlative recital, with the whole historical stretch spanned in delightful ways without undue hand twisting.

So what matters is the beauty and dramatics of the music in Carol Leone's hands. And for all that we have a definite winner performatively! Ms. Leone is a true artist.
Posted by Grego Applegate Edwards at 5:46 AM