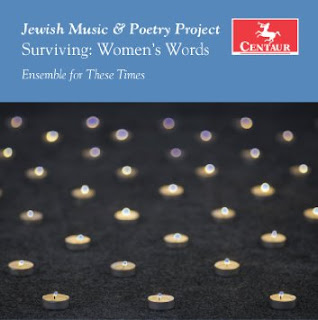 The Jewish Music and Poetry Project is an ongoing series by the chamber group Ensemble for These Times, headed by Nanette McGuinness. It focuses on "new music to texts by Jewish women poets or by women composers" or alternately, "music by composers who were banned, exiled or destroyed in the Holocaust."  Today, I look at their latest issue, Surviving: Women's Words (Centaur CRC 3490), a series of four song cycles by David Garner, music settings of four Holocaust survivor poets: Mascha Kaleko, Else Lasker-Schuler, Rose Auslaender and Yala Korwan.

The music is modern-expressionist, moving, well wrought. Nanette McGuinness is the soprano featured throughout. Her somewhat wide vibrato takes some getting used to, but in the end fits the tone of the content. She is joined by pianist Dale Tsang, and cellist Adaiha  MacAdam-Somer for two of the four cycles. Both are well suited to the music.

The heartrending words put both darkness and hope in a poetic light. Garner's music brings out the moods and is extremely well done. Recommended.