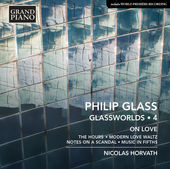 As far as the later works of Philip Glass are concerned, I have decidedly mixed feelings on them. From the post-Reichian mesmerizer of works such as "Music with Changing Parts," he has taken a turn toward late romanticism, especially in his piano music. Tchaikovsky and Rachmaninov, Schumann and Chopin re-enter the picture, only the music is built on minimalist repetition, sometimes in the form of fairly simple repeating chord changes with variations in the right hand, other times whole phrases repeat, and the attractiveness of the phrase or the chordal underpinnings can vary from the rather sublime to the less so. My reaction to each work depends on whether the structured inventions appeal to me. Sometimes they do not.

I reviewed the second volume of Nicolas Horvath's Glassworks on November 2, 2015. Horvath showed me then that he was a rather brilliant interpreter of the "Etudes" that made up the volume--and indeed his technical prowess and imagination made the music come alive convincingly.

Today we have his Glassworks 4, On Love (Grand Piano 692) and it is very well performed. There are four works, the lengthy 47 minute "The Hours," a short "Modern Love Waltz," the World Premiere of the short "Notes on a Scandal" and the earlier, mesmerizing "Music in Fifths."

I come off repeated listenings of this volume with the same general feeling I get with much of his later work. Some seem a little schmaltzy, some a little too simplistic, while others stick in my memory as worthily wrought.

Once again Horvath does a fabulous job as the pianistic conduit, but at times there is not a whole lot he can do with the music. When there is depth, all is well. When no, less so. About half of this album attracts me. The other half I can leave alone. Bravo to Horvath in any case!
Posted by Grego Applegate Edwards at 5:07 AM