Paul Futer, Susan Nowicki, Running at the Top of the World 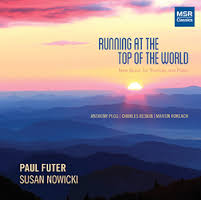 The music has the sort of stately logic and muscular dramatics that goes back to Hindemith and forward to today.

All three composers have a vividly idiomatic grasp of the trumpet and its dramatic potential. Charles Reskin's "Sonata for Trumpet and Piano" (2007) begins the program with a neo-classical flourish. Anthony Plog's "Sonata for Trumpet and Piano" (2010) alternates rapid passagework and memorably gestural kinetics with introspective breathing space.  Martin Rokeach's "Running at the Top of the World" (2014) finishes off the CD with complexities and ultra-contemporary motor sonorities both stirring and rhythmically vital.

The performances are gorgeous, with Futer and Nowicki keenly attuned to the music at hand and to each other.

Anyone who responds to state-of-the-art contemporary brass music will find this highly enjoyable and rewarding.

A stunner!
Posted by Grego Applegate Edwards at 4:58 AM

Email ThisBlogThis!Share to TwitterShare to FacebookShare to Pinterest
Labels: contemporary modern new music for trumpet and piano, neo-classical and post-modern music for trumpet, paul futer and susan nowicki running at the top of the world gapplegate classical-modern review