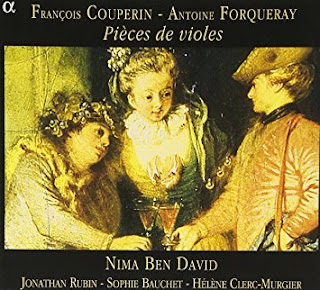 When you listen to the basse de viole in its period incarnation, properly played, it's not at first about the notes. It is first off the incredibly beautiful ambiance, the resonance of the instrument. Much different than a cello and to me deeply attractive.

All that is certainly going on for viole adept Nima Ben David and ensemble on Pieces de violes (Hopital Alpha 007). It is a consort with lead basse de viole plus the figured bass of another viole, theorbo or guitar, and harpsichord. WHAT notes are determined by a selection of gems by Francois Couperin (1668-1733) and Antoine Forqueray (1672-1745), both renowned exponents of the music in their day, the latter primarily a viole virtuoso, the former you probably already know, except perhaps not his viole music.

The ensemble gives off with a kind of depth of feeling, a timelessness in the slower passages that is uncanny. The more rapid movements have a pronounced momentum and spunk. The ensemble does a superb job giving us the enveloped, surging resonant sound and a singular feeling and then the composers' note choices hit you as ravishing throughout.

Nima Ben David is really first-rate among contemporary practitioners of the ancient sound and the ensemble is in perfect flowing symmetry.

I could listen to this music all day. It is a bright spot in my ear activities for the last week or so. You really should hear it! My highest recommendations on this one.