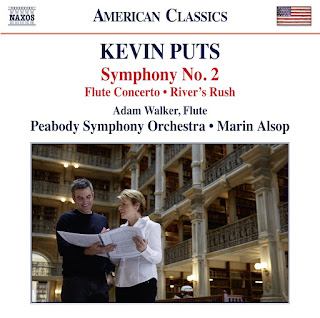 Kevin Puts (b. 1972) can paint musical imagery with the very best out there. His Symphony No. 2 with  Marin Alsop and the Peabody Symphony Orchestra (Naxos 8.559794) tells of the tragic morning of 9-11. Peaceful beginnings and lyrical ruminations give way to collective orchestral horror, then resolution.

His "Flute Concerto" with Adam Walker is a beautiful meditation on modern tonal possibilities, with the added expressivity of new music but a pronounced beauty, a pastoral sort of feeling of a sunny morning outdoors, not that he had that in his mind but the expression is tenderly sunny. There is less peace and a rhythmically vital middle movement, and a very notefull final movement. It's all good to hear.

This is music to bring you to life, played marvelously by Alsop and Peabody.

It is not out to be especially modern but it is fine music, finely detailed.

He is already well known.  A Pulitzer Prize in 2012 certainly garnered him attention but the music in itself does that wonderfully here. Catch up with him on this release. Recommended.
Posted by Grego Applegate Edwards at 5:31 AM