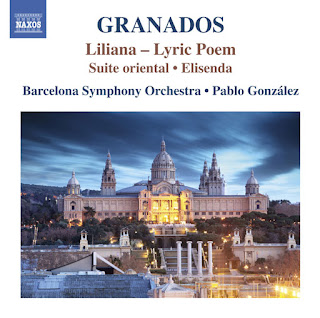 We consider today the third volume of Granados orchestral works by Pablo Gonzalez and the Barcelona Symphony Orchestra: Liliana - Lyric Poem, Suite Oriental and Elisenda (Naxos 8.573265). We are encountering works that are rather obscure, at least in the States. "Liliana" (as arranged by Pablo Casals) (1911/21) and "Suite oriental" (1888-89) are heard in their world premiere recordings. "Elisenda" (1912) is heard in its critical edition by Douglas Riva.

The melodic memorability, impressionist palette and Spanish folk touch are nicely present here in varying degrees. Not all of it is exactly "nationalist" but it is all well done. This is music to grow into, not something that will overawe on first hearing but with a pronounced Granada fingerprint for those who know his more familiar music, and filled with pleasurable, evocative strains for those who don't.

Gonzalez and the Barcelona Symphony give bright, effective readings.

Recommended for a better appreciation of Granados' oeuvre and for those who happily traverse the Spanish-Euro impressionist scene in the early years of last century.
Posted by Grego Applegate Edwards at 4:59 AM