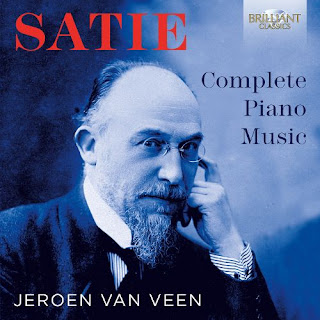 We live in the post-Satie age. Who would have thought during his lifetime that he eventually would become as influential as, maybe, Wagner? We cast about today and we hear the quirky diatonicism, the high-low dissolve in a direct addressing of the vernacular music of our time, the deliberately banal, the repetition of minimal and post-minimal music, the idea of a radical tonality that he revealed to us without perhaps being aware of it all as a trend. John Cage championed Satie and was highly influenced. Others may not talk so much about it but his music is surely in our air now.

And in a flash we have Jeroen van Veen playing the Complete Piano Music (Brilliant 95350) on nine CDs. We had the Frank Glazer 3-LP Voxbox years ago, the Aldo Ciccolini Angel/EMI LPs that came in the end to around 7 disks (now available as five CDs) but this is by far the most complete and in the end, the most satisfying to my ears (but I would say that the other sets are good to have, too.)

What do you get in the truly complete van Veen version? You get the primarily lyrical works such as the "Gnoissiennes" (7) and "Gymnopedies" played with an achingly beautiful slowness, the ballets that exist in piano reductions, "Cinema" and other orchestral works played in two or four-hand versions (the latter with Sandra van Veen), the music hall ditties, all of them, a full disk of "Vexations" (and a link to around 23 more hours of it if you cannot get enough), some downright obscure pieces such as "The Dreamy Fish," a piano version of Debussy's orchestral treatment of two of the "Gymnopedies," and more besides.

In this low-price Brilliant box there is EVERYTHING and in pristinely clear, beautifully worked out van Veen versions.

When you listen through you never get the feeling (or I didn't) that there is too much or that there is filler. It is all hypnotically vibrant Satie. Even something seemingly thrown off casually reveals that hidden depth of humor, irony or sparkling beauty.

In short this is a godsend for Satie lovers but also an ear opener for those who have not yet explored him fully.

Van Veen is the person to pull all of this off with care, wit, crisp clarity and verve. A Satie milestone is this. I cannot recommend it more highly.
Posted by Grego Applegate Edwards at 5:07 AM