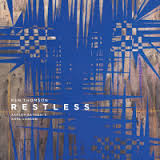 Ken Thomson is a contemporary composer of great poise and expressivity. His new album releases October 28 on LP and download--and you can preorder at http://naxosdirect.com/items/ken-thomson-restless-371154. I am ahead of the game because the album so occupied my listening that I failed to note the street date, but consider this an early recommendation.

The album Restless (Uffda/Cantaloupe ) gives us two chamber composition that combine modern and less modern harmonic-melodic inventions that have depth of feeling and a natural restlessness that is mostly post-minimal. They are often motored with a zestful rhythmic or jagged sequentiality. They also sometimes give out with a post-rhapsodicity that can be somewhat dark and brooding but always directly communicative.

"Restless for Cello and Piano" (2014) gets insightful treatment from cellist Ashley Bathgate and pianist Karl Larsen. "Me Vs." is for solo piano. Both get and retain listener interest and fascination with admirable scoring and vital performative presence.

It's the sort of music you could wish you wrote yourself--to me the best recommendation I can give. It is music that shows an exceptional musical mind and heart at work. The performances impress with their sympathetic acumen.

Order a copy and immerse yourself in chamber profundity. It is something you will turn to and remember I hope for a long time to come. Bravo!
Posted by Grego Applegate Edwards at 5:43 AM