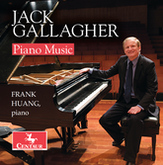 As the world turns around us, new music is ever appearing, thankfully. Today it is the Piano Music (Centaur 3522) of Jack Gallagher. We have encountered his music fruitfully with the release of his orchestral music on several Naxos disks a while back (type his name in the index box for my review of his "Symphony No.2").

The orchestral disks showed a fine musical mind at work. This new release gives us another side of the composer, pairing down to the basics: his rather brilliant inventive faculties, a first-rate pianoforte, and the formidable interpretive pianism of Frank Huang.

Listening the first time, you may hear a lineage connection with Hindemith now and again, in the advanced harmonic-tonal restlessness, the beautiful juxtapositions of a kind of pan-diatonic, pan-chromatic structural profundity. But Jack goes further into what is a very modern, even jazz-influenced territory of voicings in fourths and fifths, with sometimes brittle and other times flowing edgy lyric qualities.

The  ambitious "Sonata for Piano" (1973/2005) and "Sonatina for Piano" (1976/1999) at once strike you as extraordinarily music, memorably complex and lucid essays of a post-neo-classical sort.

It's exciting, very idiomatic, outstanding piano music. Gallagher is gifted with prescient abilities that make his language very directly communicative yet filled with complexities to satisfy the most exacting of ears. Frank Huang gives us ideal readings.

All you who revel in measured and expressive pianistic modernism, search no further. Jack Gallagher provides much to appreciate, to grow into after repeated hearings.