Philip Henderson, From the Old World to the New World, The Green and Pleasant Band 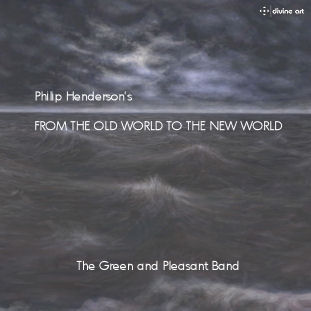 When you look back at the making of the United States, the truth is that all citizens, either in their own experience or that of their ancestors, came from somewhere else, even the Native Americans. The universality of immigration is a social fact.

It is fitting that the tale of such an epic journey be told in music. In this case we have the story of composer Philip Henderson's father and his sojourn from Kent, England to New York City in the 1930s. All takes place in the multi-part suite From the Old World to the New World (Divine Art 25141), as performed by the chamber orchestra The Green and Pleasant Band with soloists and vocalists.

It follows the protagonist's origins in rural England, the magic of the woods, the fateful sea voyage and the new life in America.

The music has a kind of folk-like archaicism in parts, a post-modern down-to-earth quality and ultimately a couple of defining songs, especially "New York Sing Me!" as done by Pia Sukana and, perhaps a bit more show tune-like than I was expecting to hear, "Play Broadway!" by Paul Baker. Aside from the latter the suite pulls together music of enchantment, lyric effusions that wear quite well from listen to listen.

Philip Henderson gives us something unexpected, original and filled with homespun charm. It is easy on the ears yet singular enough to gain and keep the attention of the more musically demanding among us. Bravo!