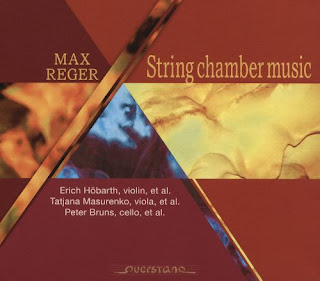 The world of Max Reger (1873-1916) is essentially multistylistic, which might explain why his music has gotten less attention in the years after his death. If one looks at the succession of styles as a kind of unilineal evolution on a line of progression to the most advanced and modern, as many did in the height of the first modern era per se, Reger does not easily fit. In his vast output, you can find works with a very chromatic approach, proto-modern, if you will. But then there are works which are more late romantic in their overall feel. Then there are works that look backward to Bach, especially in some of the unaccompanied string works, and/or have other neo-baroque elements. Finally these traits can and do overlap in any given work. Not everything is pure anything.

In the age we live in now there are many composers that take a multifold approach. We no longer demand that purity of intent that was so important in ages passed. So perhaps this is Max Reger's time? Why not?

We can feel that multiplicity of Reger's musical view quite nicely in the three-CD set String Chamber Music (Verstan VKIK 1617). One volume each is devoted to works for violin (featuring Erich Hobarth), viola (featuring Tatjana Masurenko) and cello (with Peter Bruns).

Each volume features a goodly assortment of works--for the instrument unaccompanied, with piano, or in small groupings of strings. As an added bonus the cello volume includes several works by Julius Klengel, a cellist and close associate of Reger. They enhance the program.

The soloists are excellent, as are their collaborators. A close listen to the contents of this boxed set will open up the string-oriented chamber worlds of Reger and give you a bird's-eye view of the best of his output in this realm.

It is music to savor, showing a restless beauty and a rather exceptional musical mind at work.

It is a great introduction to chamber Reger. I am very glad to have it and I think you will be, too.
Posted by Grego Applegate Edwards at 5:41 AM